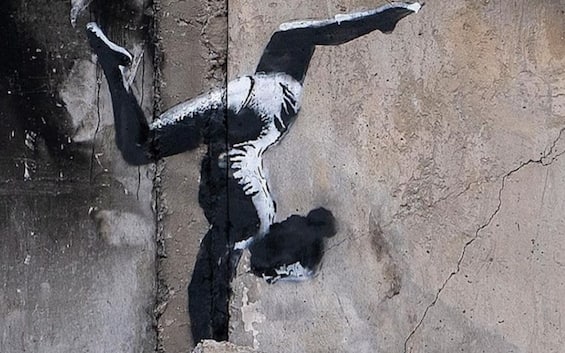 Banksy in action in Ukraine against Putin. The famous British street artist has created a work on the wall of a skyscraper in Borodyanka, a city heavily hit by Russian bombings, located in the Kiev region. The work – as the agency reports UNIAN – depicts a girl doing a somersault and was drawn on the ruins of the building, destroyed by bombs. Bansky then posted the photo on his Instagram profile. (WAR IN UKRAINE, LIVE UPDATES)

The famous and mysterious street artist had already chosen Borodyanka in recent days to leave two other works of his, one of which on what remains of the wall of a building destroyed by bombs. To tell it are two images of the photographer Ed Ram disseminated on social networks and relaunched in Italy by Stefano Antonelli and Gianluca Marziani, curators of important exhibitions of the artist. In the first, very eloquent, a judoka child who makes one think of the invaded country knocks out an adult, with a reference to Putin, who has been suspended as honorary president of the international judo federation. The other, a short distance from a very busy road, shows two children painted on some marble blocks while playing on a swing which, in reality, represents a Friesian horse, or a defensive obstacle to prevent the advance of the enemy.