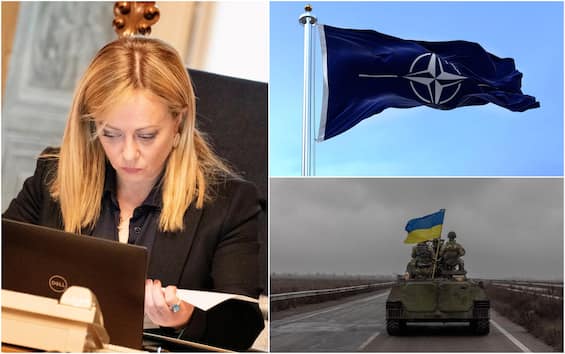 After the go-ahead from the Chamber, the Council of Ministers approved the so-called NATO decree, to extend the provision “until 31 December 2023” and “subject to the address of the Chambers”. The sixth aid decree for Ukraine could soon arrive on the government’s table. The most accredited hypothesis is that of the “Aspide” systems. Meanwhile, Moscow accuses the US and the Atlantic Alliance of being involved in the conflict, “supplying weapons and training soldiers on the territory of the United Kingdom, Germany, Italy”

Italy continues to send weapons to Ukraine. Means, materials and military equipment will be supplied to Kiev, to fight the Russian invasion, also throughout 2023 (WAR IN UKRAINE: THE SPECIAL – ALL UPDATES). After the green light from the Chamber, the Council of Ministers approved the so-called NATO decree, to extend “until 31 December 2023” and “subject to the address of the Chambers”, the measure already introduced after the start of the war by the Draghi government (and which was expiring at the end of 2022). On mailings, the line is of continuity with respect to the provisions of the previous executive. Precisely between the end of this year and the beginning of next, the sixth aid decree for Ukraine could arrive on the government table: this time the need expressed by Kiev, with the arrival of winter and the intensification of bombing at points strategic, is to make use of air defense missile systems to protect the country’s infrastructure from Russian attacks that arrive from the air. For this reason, the most accredited hypothesis is that of the ‘Aspide’ systems, which in these hours prevails over the possibility of supplying the ‘Samp/T’ system, much more advanced but also rarer and therefore difficult to find. The sixth aid package therefore begins to take shape, which will be contained in a new decree, however not yet on the table. The provision, as Defense Minister Guido Crosetto has repeatedly reiterated, would in any case pass through Parliament.

With the supply of the Skyguard-Aspide, Italy would guarantee a weapon with high tactical mobility, even if of an older generation: it is a short-range surface-to-air missile system against the air threat carried out at low and very low altitudes. The missiles are deposited in the Rivolto hangars (Udine), where at this point the thrusters could be updated to make them usable. Instead, the supply to Kiev of the ‘Samp/T’ system could only be postponed, a hypothesis that had been taken into consideration and which, at least for now, seems to be drifting away due to technical problems in the joint missile defense program carried out together with the France. The ‘Samp/T’ is a medium-range missile system suitable for operating in conditions in which there are reduced reaction times against the air threat, it has high mobility and the possibility of adapting the device to the times of any maneuver. The current version has state-of-the-art capabilities in countering airborne threats and short-range tactical ballistic missiles. Our armed forces – according to what emerges from the official public sources of the Army – are equipped with five batteries at the fourth anti-aircraft artillery regiment in Mantua which, since the entry into service of the system in 2013, have been used in multiple operational and training. Between 2015 and 2016 a Samp/T unit was also deployed in Rome for surveillance of the capital’s skies on the occasion of the Extraordinary Jubilee. Italy supports Ukraine not only with weapons. Aid to the resistance would arrive – as reported by the Corriere della Sera – even from a bunker near Rome, where the conflict areas of Russian threats are identified with a satellite system.

However, the lunge on military aid to Kiev comes in these hours from the Russian Foreign Minister, Serghei Lavrov, who also includes Italy among the countries where military training of the Ukrainians takes place, accusing NATO and the USA of directly participating in the conflict. For Lavrov, the exercises are carried out on the territory of “the United Kingdom, Germany, Italy and other NATO countries. In addition to training on their territory, hundreds of Western instructors work directly on the ground, showing the Ukrainians how to shoot with the weapons supplied”. But the exercises would instead take place in NATO areas in Europe, in the border areas with Ukraine. However, the Italian Defense has denied specifying that “it has not carried out any training in Italy” in favor of the Ukrainian military on the national territory and that to date it has sent “only four members of the Armed Forces to Germany as part of the European training group, which, right now, they are planning possible training cycles to take place in the future”. In fact, only two weeks ago the EU Council had launched the Union’s military assistance mission, ‘Eumam’, to support and provide training to up to 15,000 members of the Ukrainian armed forces.