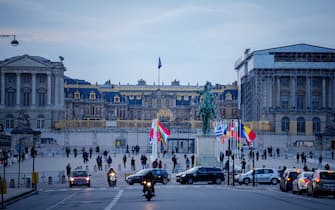 A two-day summit begins today in Versailles that will see the heads of states and governments of the European Union discuss crucial issues such as common defensebuild a stronger economic base e reduce energy addictions of the blockade: a need that became even more urgent after the war in Ukraine and the deterioration of relations with Moscow, also due to the decision to sanction it

WATCH THE VIDEO: Bombs on Mariupol, Zelensky: “Genocide against Ukraine”

The summit, which was to mark the apex of the French presidency and was conceived as a ‘brainstorming’ to change the Stability Pact, will take place a few hours after the bombing of the Mariupol pediatric hospital and partially in conjunction with another very important meeting: the one between the Ukrainian foreign minister Dmytro Kuleba and its Russian counterpart Sergey Lavrov in Antalaya, Turkey

In a draft of the declaration that Agi has seen, we read that “Russia’s war constitutes a change in European history” and that it is necessary to understand and define “how the EU can be at the height of its responsibility in this new reality by protecting our values, our democracies, the safety of our citizens and our European model ”

According to reports from Agi, in the document the leaders commit themselves to “resolutely strengthen” investments in terms of defense and innovative technologies. This will result in the decision to “substantially increase defense spending focusing on identified strategic deficiencies and with defense capabilities developed collaboratively within the European Union “. An objective that will also pass through the development of” synergies between civil, defense and space research and innovation ”

The goal is therefore clear, but the way to reach it is still to be defined. One option is to use a common tool, along the lines of the Next Generation Eu, but there are those who oppose it and consider it an issue to be addressed at national level excluding the issue of Eurobonds

This instrument is also spoken of as a way to achieve greater energy independence. As Ispi recalls, today around the 30% of the gas imported from the EU comes from Moscow and the percentage rises to 50% if only extra-European imports are considered. “The sooner we switch to renewable energies and hydrogen, the sooner we will be truly independent and masters of our energy system,” said European Commission President Ursula von der Leyen

The EU has already presented its plan: it is about RePowerEu, a package that could cut imports from Russia by two thirds within a year and provides for the diversification of supplies, the increase in energy production from renewable sources but also greater energy efficiency. These measures are the starting point of the summit, but according to some rumors, it will hardly go further

Energy, EU: two-thirds cut of Russian gas within the year

As Ansa explains citing European sources, the issuance of Eurobonds to finance energy costs is not on the agenda also because the energy transition is already a pillar of the Recovery Plan and resources have already been allocated in this regard. However, this will not prevent Member States from discussing another proposal coming from Athens: that of to set a ceiling on gas prices (in the photo the premier Kyriakos Mitsotakis)

The bloc also wants to become more independent in other sectors to build a “stronger economic base”. This is why we also want to give objectives on the subject of critical raw materials (internal production and recycling to cover at least one third of the needs by 2030), semiconductors (producing 20% ​​of the global market share in the EU by 2030) but also food and artificial intelligence

Pending the achievement of these objectives, the EU must continue to rely on gas from Russia, andembargo on gas and oil decreed by the US and Great Britain for the Old Continent remains a taboo. For this reason, in the last few hours, the sanctions have been tightened in another sense

Not just wheat and steel, Russia’s export numbers: what it sells and to whom. THE DATA

However, Brussels remains firm in its support for Ukraine and, according to some rumors, it is possible that in the Final Declaration of Versailles reference is made to its application for EU membership. As has already been said several times, the process is long, but certainly less hindered than a possible entry of the country into NATO