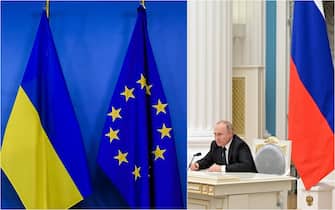 A new barrage of sanctions, the closure of the skies to Russia and 500 million euros for the financing of the delivery of arms to the Ukrainians. The EU accelerates and strengthens its countermeasures against Russiacompacting alongside Kiev and widening the scope of its sanctions

WATCH THE VIDEO: War in Ukraine, the EU allocates almost 500 million for arms in Kiev

First of all economic measures that Moscow and its oligarchs are doomed to do harm. But Europe is not enough. “For the first time we will finance the purchase and delivery of weapons and crews for a country under attack “, announced the president of the EU Commission Ursula von der Leyen, outlining, in fact, an unprecedented role for the Union: that of an active subject in a conflict

That Brussels wants to get serious also emerges from another move, also unprecedented, explained by Von der Leyen: the banning of the Russian government media RT and Sputnik and ancillary warheads. “The Kremlin’s media machine will no longer be able to spread its lies to justify Putin’s war”, was the thrust of the number one of the European executive who, yesterday evening, also stressed that “he wants Kiev in the EU. ”

War in Ukraine, the story of the Sky TG24 correspondent. VIDEO

On the table of the Foreign Affairs Council, summoned in a videocall in the late afternoon, the strong theme was theEuropean Peace Facility. The EU, for the first time, has decided to activate an instrument created just a year ago as an embryo of the European defense project

Ukraine, from anti-tank bikes to Molotov cocktails: this is how civilians resist. PHOTO

The High Representative of Foreign Policy Josep Borrell has requested and obtained the activation of two types of military assistance: one for non-lethal weapons and one for lethal material, for which 450 million will be fielded. Not only helmets and uniforms, but also ammunition, rifles, missiles. Brussels will reimburse, even retroactively, all those states that send arms to Ukraine. But it will also provide incentives, with financial support, to the greatest number of capital to do so

Russia, Putin orders the warning of the deterrence forces: this is what they are

The possible issue of the unanimity of the 27 for the activation of the instrument has been circumvented with the so-called “constructive abstention“: a State, in fact, may also refuse to send weapons, but without hindering the decisions of others. Today, in the late morning, there will also be a Extraordinary Council of EU Defense Ministers. The meeting will be by videoconference

War in Ukraine, here’s how Italy could replace Russian gas

European action is parallel to that of NATO, which confirmed that the military support of the allies in Kiev “is strengthening” with the sending of missiles and anti-tank weapons. The objective of the member countries, compact as few times in recent European history, is to isolate Moscow in a deeper and deeper way

Ukraine, so the Italian army will be deployed

It’s official on ban for Russian airlines to fly to Europe. Even for the private jets of the oligarchs. And as a possible further measure to be implemented in the coming days, the EU evaluates closure of the maritime space for Russian ships

From a financial point of view, Brussels has opted for it stop all transactions, due to the freezing of foreign assets for the Russian central bank (50% of the total reserves) and for the fielding of individual sanctions for about twenty oligarchs. And Europe also enters the crosshairs Belarus

Brussels has in fact fielded a package of ad hoc sanctions that stop trade between the EU and Minsk in the sectors already affected by Russia and prohibits the importation of products such as mineral fuels, tobacco, cement, iron or steel from the Alexander Lukashenko regime. The exclusion of Russia from the system was left out of the third package Swift. But Borrell assured that the goal is to finalize everything by today. As expected, it will not be an exclusion tout court, but a selective one

The sanction could cover just under about ten institutes. “We believe that financial possibilities must be kept open so that we can send money to families or pay for things that are necessary”, explained the European Foreign Minister.

And, among the necessary things, it is possible that there is the gas, the main node for the EU approaching war and, above all, for countries such as Italy and Germany. The hypothesis remains concrete that the list of banks excluded by Swift does not include Gazprombank, the institution with which Europeans pay for gas supplies to Moscow. Today the Council of Energy Ministers is also scheduled to be held in attendance in the afternoon