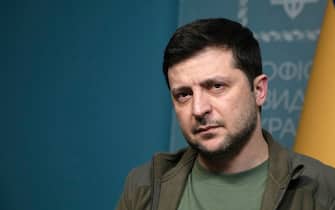 Among the most serious consequences of the war in Ukraine, there is also it specter of a global food crisis. The country is in fact one of the pmajor wheat producers in the worldand the production ready to be exported it is stationary in the portsespecially that of Odessa

The Ukrainian president Volodymyr Zelensky accused Russia: “Today there are 22 million tons of grain blocked and the Russians constantly steal it and take it somewhere else. The world community must help Ukraine to unblock ports maritime, otherwise the energy crisis will be followed by a food crisis ”

The images of the photographer-soldier from the Azovstal steel mill

Zelensky then relied on international aid to avert the crisis: “Russia has blocked almost all ports and all maritime opportunities to export food: our wheat, barley, sunflower and more. These roads need to be unblocked because there will be a crisis in the world. There are several ways to unlock it and one way is the army. That’s why we turn to our partners with the request for weapons ”

Zelensky: “The situation in Donbass is extremely difficult”

The war involved two of the most important countries for the production of wheat: according to what is reported The Corriere della Seraindeed, Russia and Ukraine produce a third globally. Not only that: 9% of global wheat exports departed from Kiev in 2019, but also 16% of corn exports, 10% of barley and 42% of sunflower oil. On the other hand, 40% of potash, a fertilizer, comes from Russia and Belarus

L’Africa is the continent that risks paying the highest price to block the export of wheat e the increase in the cost of food resources. The vice president of the European Commission Frans Timmermans made it known that “we have opened new means of transport for Ukrainewe must reach other ports and find means of transport that are not usually used like trains and organize the world market ”

“The wheat is there but does not arrive at the right place”, Added Timmermans. “There is the risk of hunger in Africawe must ensure that no one runs out of wheat. “According to reports from the Messengerthe EU would be ready to make its ports on the Black Sea available to transport Ukrainian wheat and maize to the rest of the world

In addition, the 27 members of the EU would be ready to support with their budget the nations most exposed to the risk of famine in Africa and the Middle East. The Union’s strategy would therefore be aimed at averting a food crisis on a planetary scale, especially for the countries of the southern hemisphere

There China instead intervened with a “one-off” grant of 10 billion Yuan to support individuals and companies who they cultivate and produce cereals: subsidies that aim to support grain farmers during the summer and autumn harvest and sowing period, to alleviate the impact of rising costs

However, the situation remains complex on a global level: in recent days India announced the block – later partially lifted – of grain exports produced in the country in order to “guarantee food safety and to control inflation ”, explained the Ministry of Commerce and Industry

To pay already a very high price for the scarcity of available grain and the rise in prices it was Sri Lankaheavily dependent on imports to meet the food needs of the population: the island state it has in fact declared defaultthe first since the country’s independence from the United Kingdom in 1948

Also in Tajikistan the situation is tense: there have been fierce clashes between demonstrators and police forces, which caused over twenty deaths. Among the causes of discontent in the country there is also the food crisis caused by the war in Ukraine