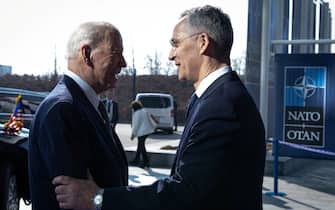 With the war in Ukraine, NATO has also returned to play a central role, that is the alliance born after World War II to strengthen the defense of Western countries and ensure that, in the event of an attack, they could count on each other’s help. of the other. In 2019, French President Emmanuel Macron had said that he was “brain dead”, but today many European leaders are looking at precisely this cooperation as a building block for protect yourself from possible threats

WATCH THE VIDEO: Stoltenberg, we will strengthen NATO countries in the long term

The alliance, therefore, not only continues to exist, but is growing stronger. As stated in the final communiqué, released at the end of a summit in Brussels, “the allies are increasing their defense spending“. The goal is to reach at least the 2% of GDP and Italy also wants to achieve it. As Prime Minister Mario Draghi said in recent days, “the determination is there, when to do it and how to do it is all to be discussed”

US atomic bombs in Italy: how many and where are nuclear devices

The leader of the 5-star Movement, Giuseppe Conte, for example, has already anticipated that his group will oppose the increase in military spending because the urgency now is to help families and businesses. According to the former Prime Minister, the strengthening of European defense must rather pass through a rationalization of resources

The increase in financial resources is considered strategic to strengthen member countries in the long term, but other important decisions have been taken in Brussels on the future of NATO and, more generally, of Europe. One of these concerns the deployment of four battlegroups in Bulgaria, Romania, Slovakia and Hungary. This will involve a strengthening of the alliance in Eastern Europe where, according to the press release, 40 thousand troops have already been positioned as well as naval and air assets

Born, what are the structures of the Alliance in Italy and what they do

“The main responsibility of NATO is to ensure that there are no attacks on members of the Alliance,” said NATO secretary general, Jens Stoltenberg, in an interview with Tg2. “The message at the top was one for all, all for one. We demonstrate this commitment too increasing the presence of NATO troops on the eastern front. We do not provoke an attack, but we prevent it ”

Ukrainian war, Biden: “NATO will respond to Russia’s use of chemical weapons”

The strengthening of the eastern front is a consequence of the war in Ukraine, A country that NATO will continue to assist with financial, humanitarian and weapons aid. In this regard, Stoltenberg specified that anti-tank weapons, anti-missile defenses and drones will arrive “which have proved very effective”. Going into more detail, the Corriere reports that the US is also consulting the allies on the sending of the so-called “switchblade” drones, which weigh just 3 kg and are transportable in a backpack

In general, Stoltenberg said, “on the ground, we will have substantially more forces in the eastern Alliance, at greater readiness, with more pre-positioned equipment and supplies. In the air, we will deploy more jets and we will strengthen our integrated air and missile defense. At sea we will have aircraft carrier strike groupssubmarines and a significant number of combat ships on a persistent basis ”

The deployment of all these military means and, more generally, the evolution of the conflict in Ukraine contradicts the predictions of those who hypothesized a “hybrid” clash, fought also and above all with cyber attacks. However, NATO has also moved forward on this front and in the statement released at the end of the last summit we read that the member countries are increasing their capabilities also on the cyber frontexchanging information and support

NATO states that all the measures taken are proportional and preventive, but there is the will to accelerate the transformation of the alliance for an even more dangerous strategic reality. For this, the full range of forces and capabilities necessary to maintain credible deterrence and defense will be further developed, and there will be specific exercises.

One aspect that does not appear to have changed is the leadership of the United States. But since the conflict began, various exponents of EU member states have returned to talk about the need for one common defense policy at European level. One of the last to speak in this sense was Fabio Rampelli, deputy of the FdI and vice president of the Chamber. “The establishment of a European armed force it is an important and necessary step, we need an integrated system capable of coordinating with NATO and representing an ever greater European autonomy ”