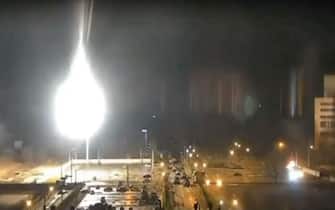 There Zaporizhzhia nuclear power plant, in the south of Ukraine, was affected last night by the clashes between the Russian and Ukrainian armies. The attack would have caused a fire, which was then put out, but did not, according to what the government reported, lead to one radioactive leak

WATCH THE VIDEO: Ukraine, the 15 nuclear reactors and the risks

The attack, however, ignited the fear of a “new Chernobyl”, The power plant in Ukraine where the most serious nuclear accident in history took place in 1986. In the country they are indeed present other sites potentially at risk because of the conflict. (In the photos: archive images of the Zaporizhzhia nuclear power plant)

Zelensky after the attack on the power plant: “Russia uses nuclear terror”

In Ukraine there are 4 active nuclear power plants. In total they are 15 functioning reactors. They produce a total of 3,823 megawatts, covering 55% of the country’s energy needs

The Zaporizhzhia nuclear power plant, around which the fears of these hours have been concentrated, is the largest in Europe and the ninth largest on the planet. It was built between 1984 and 1995

The latest news on the war in Ukraine. DIRECT

Under normal conditions, as reported by the Guardian, it generates almost half of the electricity deriving from the atom in the country. The power plant, where 6 of the 15 Ukrainian reactors are active, is located about 200 km from the disputed Donbass region and 550 km from Kiev

In Ukraine there are three other active nuclear power plants: in the south of the country there is another one, with 3 functioning reactorsand this too in an area at risk of being directly involved in the clashes between the Russian and Ukrainian armies

The two more nuclear power plants, in Rivne and Khmelnitsky, they are located west of Kiev and close to the border with Poland: there are 4 reactors active in the first plant and another 2 in the second, for a total of 15 across Ukraine

To these obviously is added the Chernobyl nuclear center, as known no longer in operation following the disaster of 1986 and ended up under the control of Russian troops in recent days

Nicola Armaroli, CNR research director, told Corriere della sera that “there are several dangers. It is the first time that a territory hosting nuclear power plants is in a war scenario. These plants were not designed to withstand a military attackeven conventional ”

“The third risk concerns the man“, In plants such as that of Zaporizhzhia where constant human intervention is required:” How can personnel who already work in normal conditions under stress operate in this situation? We remember that human error was also decisive in Chernobyl”