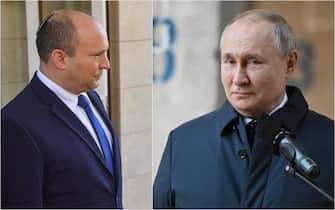 Israeli Prime Minister Naftali Bennett, who has hitherto remained cautious towards Russia, flew by surprise to Moscow to Vladimir Putin on Saturday 5 March to attempt mediation in the Ukrainian conflict, in what was the first visit of a leader foreigner in the Kremlin after the attack on Kiev

With the German Chancellor, Bennett discussed “various issues, including the situation between Ukraine and Russia,” reports the Times of Israel, citing Bennett’s staff. The Israeli premier spoke twice during the evening with the President of Ukraine Volodymyr Zelensky. Bennett then concluded his visit to Germany in the evening and returned to Israel

Sanctions against Russia, alarm from rating agencies: Moscow towards default. The analysis

In the interview with Putin, however, which lasted three hours and revealed by Kremlin sources only shortly before it ended, the possible imminent agreement in Vienna on Iranian nuclear power, which Israel opposes, was also addressed

Ukraine, Unesco takes action to protect sites: which ones could be at risk

The move by the Israeli premier comes at a time when American and European diplomacy seem unable to find an exit strategy after all Western countries, albeit with distinct intensities, have joined forces in support of Kiev, providing economic and military assistance. and by imposing economic sanctions against Russia

Ukraine, local media: “Kiev negotiator killed, he was a spy”. Yellow on those responsible

Although it does not belong to the EU or to NATO, even Israel is in all respects considered a nation on the Western side, especially as a leading ally of the USA.

For this reason, his approach of cautious condemnation towards Moscow, glossing over the sanctions in Moscow and denying the transfer of arms to Kiev, has so far aroused discontent and perplexity on both sides of the Atlantic and in Ukraine.

But Israel is also the only Western country that can boast privileged relations both with Russia (for historical reasons, immigration and Moscow’s role as a power broker in the Middle East) and with Ukraine (where a community of about 50,000 lives. Jews, including President Volodymyr Zelensky himself)

For this Israel has tried to keep an open channel with both sides. According to the reconstruction of the journalist Barak Ravid, Bennett would have already proposed his role as mediator to Putin in their first meeting in Sochi last October but the ‘tsar’ would have refused (in the photo a moment of that face to face)

But now the picture has changed and no country seems more equidistant than Israel. According to some media, Kiev would have asked for a greater Israeli role as an intermediary (in the photo the October Bennett-Putin meeting in Sochi)