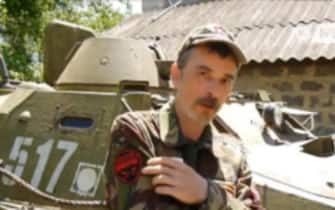 Edy Ongaroa 46-year-old Italian citizen, originally from the province of Venice, died in Ukraine fighting alongside the pro-Russian separatists in the village of Adveevka, Donbass. The news gets back to talking about foreign fightersthe fighters who voluntarily decide to go to help the armies of other countries

WATCH THE VIDEO: Italian militiaman killed in the Donbass

EDY ONGARO – Ongaro died under the grenades launched against the pro-Russian rebels by the Ukrainian resistance. This was announced on Facebook on Northeast Red Star Collectivea militant organization that defines itself as “anti-fascist and internationalist”

“With immense pain we communicate that Edy Ongaro, nom de guerre Bozambofell as a fighter to defend the free people of Novorossia from fascist regime in Kiev”, Writes the Northeast Red Star Collective. Ongaro had been in the Donbass since 2015. That year – with the legal status of a wanted man – he had left Italy after being involved in a fight in a bar in Portogruaro (Venice), where he had hit both the owner of the restaurant and a carabiniere who intervened on the spot.

In the Donbass region, the epicenter of the war that has been destroying Ukraine for over a month, he enlisted with the separatists of the Prizrak brigade, mainly made up of foreign fighters. “This is our day” wrote Ongaro when – last February 21 – the head of the Kremlin Vladimir Putin signed the decree by which Russia recognized the independence of the Donbass republics from Ukraine.

Bozambothe fighter’s name, takes up that of a partisan of the Second World War. Putin launched the “special military operation” in Ukraine to “denazify it”. The reference would be to the alleged far-right formations that have committed “genocide” against the pro-Russian population of Ukraine. Ongaro had explained that it was precisely the memory of the violence suffered by his family due to the fascist regime that pushed him to join the struggle of the republics of Donetsk and Lugansk.

The jets of the Russian oligarchs continue to fly: the investigation

GIULIA SCHIFF – Ongaro was not the only Italian in Ukraine. To fight on the ground, this time against the Russians, there is also Giulia Schiff. Twentythree years, former air force pilot Italian, had been expelled from the national army for having reported, in 2019, of having been the victim of episodes of “hazing” and violence against her

The lawsuit proved her wrong. Interviewed at Hyenas – on Italy 1 – Schiff said he is in Ukraine “because I don’t want war. And if you manage to stop here, you won’t get home. Will I stay until the war is over? Yup”

“Everyone here gives themselves a nickname. There are those who call me JasmineI’m the only woman: they all adore me, they treat me like a princess, ”Schiff said

ANDREA PALMERI – As in the case of Ongaro, for years Andrea Palmieri – the “Sosai”- is located in Ukraine. Lucchese, 42, a Forza Nuova militant and head of the ultras of the Tuscan city, fights alongside the Donbass separatists from the 2014

For the Italian judges, the name of Palmeri is accompanied by the adjective “fugitive“. Two prison sentences he is not serving because they are abroad. One to two years and eight months for assault against a leftist militant and another five years for being involved in the recruitment of fighters to be sent alongside the Russians and pro-Russian against the Ukrainians during the 2014-2015 war

Palmeri, on social media, accuses Europe of filling Ukraine with “lethal weapons”, with “russophobic propaganda and fake news.” On March 28, he wrote: “I state that war is a tragedy and it would be nice if there never was . But I want to tell you that if Russia had not started the operation at the beginning of March, the Ukrainian army would have started the operation against the Donbass republics and would have been a genocide, all the plans of attack have been found in the cities we conquered. Ukraine is not a democratic stateexists only in anti-Russian function ”

THE OTHERS – There is also Massimiliano Cavalleri (in the photo) – from Brescia, 42 years old – to fight alongside the pro-Russians, who know him as “Spartacus“. To him is added Riccardo Sotgiaa communist militant from Sassari, under investigation in Ukraine on charges of espionage and an armed gang

Sotgia, interviewed by The post last March, he explained the presence of a left-wing militant on the scene by leveraging the same Russian propaganda that Ongaro was talking about: the Ukrainian Nazi tendencies