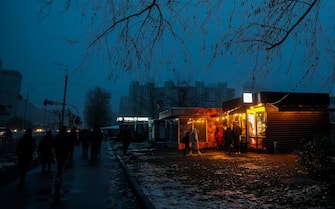 I’m difficult hours in Kiev and Ukraine. And Ukrainian President Volodymyr Zelensky once again chooses the UN Security Council to denounce the situation: “With temperatures below zero, millions of people are without heating, light, water. This is a clear crime against humanity”. And he insists: “We must lead the world off this dead end. We need your decisions”

WATCH THE VIDEO: Ukraine, Russian bombing leaves the country in the dark

Ukraine is now not only tested by nine months of fighting and resistance, but also threatened by winter and energy shortages. In Kiev, 70% of homes do not have electricity. Miss the heating and the water supply, while functioning, presents problems in some areas of the capital, as announced by the military administration of the city, underlining that the emergency and repair teams are working hard to restore the heating systems as well. In the photo, Kiev in the dark

The water supply and part of the electricity network have gone down in Kiev in recent days, after i new Russian bombings. Massive blackouts have also occurred in the last few hours in many other major Ukrainian cities. In the photo, Kiev

Ukraine war, US warns: “Putin could use chemical weapons”

The blackouts therefore derive from the rain of missiles arriving from Russia and often targeting infrastructure causing repeated blackouts. In the photo: people walk through the dark streets in Kiev

Zelensky Russian attacks on the energy system are said to be certain they will not weaken the will of the population to liberate all the occupied territories. “Our state responds superbly. The energy workers, the emergency ministry, the deminers, they all work to restore electricity and water,” he said in an interview with the Financial Times – this is a war of strength, resilience, of who stays stronger”

The Kremlin, meanwhile, after yesterday’s raids that left Ukraine in the dark, he declared that the Kiev government has the possibility of “putting an end to the suffering of the civilian population” by satisfying “Russia’s requirements”, as reported by the Tass. Kremlin spokesman Dmitry Peskov denied that Russian troops hit “social infrastructure” in their shelling. In the photo, another image of Kiev in the dark

In this scenario it stays high the risk of a radioactive nuclear disasteraccording to Petro Kotin, president of the operator Energoatom: “The regulations of nuclear power plants, equipped with reliable safety systems, provide for automatic disconnection from the electricity grid (in case of need, ed). However, this should not be reassuring: c ‘there is a real danger of a nuclear and radioactive disaster as a result of the bombing and there is a huge risk of damage to nuclear power plants,’ he said. In the photo, Kiev