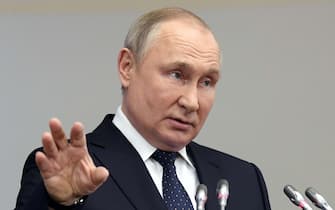 The change of strategy of the Russia in the war in Ukraine seems confirmed. The attempt to invade and conquer the country has failed, according to American intelligence, the Russian president Vladimir Putin would now point to dismember the territory of Kiev

WATCH THE VIDEO: War in Ukraine, the episode of Sky Tg24 mondo on April 29th

Rustam Minnekayev, the commander of the Central Military District of Russia, specified that now the Moscow goals include the taking ofSouthern Ukrainein order to give Russia control of the Black Sea coast and access to Transnistria: the virtually small Russian-speaking republic of Moldova

Another clarification on Putin’s new strategy would come from the latest statements by the secretary of the security council and one of the closest advisors to the Russian president, Nikolai Patrushev: spoke of the possibility of fragmenting Ukraine into “different states”

War in Ukraine, over 5 million refugees. MAPS AND GRAPHS

Another referendum it could be held, in the same period, also a Kherson, the first Ukrainian city occupied by Russian soldiers during the invasion. The goal would be to proclaim the independent Republic of Kherson, on the model of those of the Donbass

According to the intentions of the Russians, i referendum they should have already held a end of Aprilbut the trend of war in Ukraine convinced Putin to move them further. Postponement that could slip again

The strenuous resistance of Ukraine it is changing the plans of the Russians, who are seeing many of their goals fail. Meanwhile, the financial, humanitarian and military aid in Kiev by the EU and the United States

Meanwhile in the European Union they are deployed 40,000 NATO troops and 100,000 US troops. A total of 25,300 NATO forces are located in the territories bordering Ukraine

As for the future of the Bornthe war in Ukraine has led some countries that had never thought of joining the Alliance to change their minds, such as Sweden and Finland who are preparing to become new members of the organization. Ukraine and Georgia they should stay out, but Russia would thus find itself even more encircled on the wide border with Finland