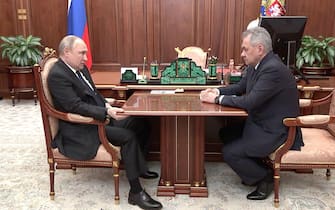 Although hours have passed since its publication, we continue to talk about the video with which Moscow announced the (unconfirmed) taking of Mariupol. The Russian president can be seen in the video in question Vladimir Putin in conversation with the Minister of Defense, Serghei Shoigu. Moscow’s intention was probably to intimidate Ukraine and the West, but some observers saw this as a not very reassuring signal for Moscow.

WATCH THE VIDEO: Moscow announces the capture of Mariupol

Among them is the US political scientist Ian Bremmer. On his Twitter profile of him, he commented on those images like this: “I dictators they can be brutal, they can be capricious, but they can’t be weak. Serious problems for Putin ”

In the video the president appears unnatural. It never changes position, the facial expression almost always remains the same, as well as the tone of the voice. Most importantly though, she grabs with the hands the small table between him and his interlocutor as if he were to stand up or, others noted, push him away from himself. The right thumb moved at times, as if in a rash, a restlessness that made one think of trying to hide the tremor of Parkinson’s. The right foot was also continuously in motion

Russia, the Kremlin’s doubts about the war. But Putin is preparing the military parade

The so subdued figure of Putin, who has always tried to prove himself healthy and with a strong physiquehas given rise to further rumors as to whether it is ill and that his condition, or any medications, may be at the origin of some of his apparently inexplicable behaviors

Vladimir Putin: from the KGB to the Kremlin, the rise of the Russian “tsar”. PHOTO

Various hypotheses have been made: there are those who have spoken of the possibility that Putin has a cancer while according to others it would be affected by Parkinson’s disease or from one mental disease. Still others think he has a less serious problem, such as back pain, but is probably being treated with massive doses of steroids

THE ASSUMPTIONS OF THE FOREIGN PRESS

In some cases, these theories appear to be linked to confidential information. There are, however, those who have advanced suspicions also on the basis of their knowledge of the leader and those who have begun to have doubts after knowing that the president has behaved too cautiously during the pandemic and he has increased his physical distance with his interlocutors more and more

From the state of health to the possible escape: the theories circulating about Vladimir Putin

THE HYPOTHESIS OF TELEGRAPH

He also dealt with Putin’s state of health Proekt, a independent Russian media specializing in investigative journalism, according to which the president has repeatedly renounced even official commitments for no apparent reason and is “now accompanied by a large team of doctors, including a thyroid cancer surgeon”

VISITS OF THE DOCTOR

According to some observers, it is possible that this is the case and that Putin is faking the opposite as part of a strategy known as “madman theory”, the theory of the madman or the madman. “It would not be the first time in international relations that someone tries to appear intentionally irrational, in order to force the adversary to be cautious,” noted Michael Horowitz, a security analyst at the Beck Institute some time ago.

Putin and the “Nixon strategy”, doubts of analysts and politicians: insane or does he act by calculation?