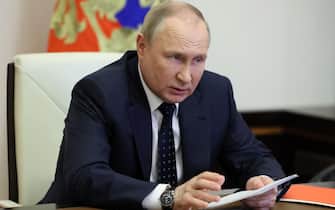 Russian President Vladimir Putin would have decided to use one of Moscow’s most celebrated state-of-the-art tanks in the war in Ukraine: the tank Terminator. To say so is the British Ministry of Defense in the latest intelligence update. The Terminators would be added to the war dolphins and laser beams, high cards played by Russia in the ongoing conflict. According to experts, however, Putin’s move to deploy Terminator tanks could represent a fatal blow to the already troubled Russian war industry.

WATCH THE VIDEO: Zelensky: “Does Russia use laser weapons? Is it invasion failure”

According to the UK, the Terminators (pictured, during a parade over the past few years) they would have been deployed in the battle of Severodonetsk: these tanks, in fact, were designed precisely for urban fighting, predominant in the scenario underway in the city of eastern Ukraine

“The only Russian operational unit of the BMP-T Terminator tank support vehicles was probably deployed on the axis of the Donbass offensive towards Severodonetsk,” the UK defense ministry said. “Their presence – he added – indicates that the central group of Russian troops (CGF), which is the only unit used for this vehicle, is involved in this attack”. The same grouping, the intelligence specified, “it had suffered heavy casualties in the failed attempt to break through eastern Kiev in the first part of the war ”

British intelligence explained that “Russia developed the Terminator after seeing the need for provide specific protection to battle tanks used during the wars in Afghanistan and Chechnya. “He added that however in Severodonetsk, which” remains one of Russia’s immediate tactical priorities “,” with up to 10 Terminators deployed, they are unlikely to have a significant impact “on the operation ( the Terminator in an archive photo)

Zelensky in connection with the World Economic Forum: “Maximum sanctions” against Moscow

Production of the Terminators was started from Russia after the experience in the 1993-94 Battle of Grozny in Chechnya: here the tanks were decimated with rocket launches by small groups of militiamen nested in the houses. For this, Moscow has thought of a tank to support the infantry and prepare the advance of the battle tanks (the Terminator in an archive photo)

Ukraine, mystery about the fate of Azovstal’s fighters after evacuation of the steel plant

Terminator tanks have three machine guns on their turret, including two heavy ones that can fire different types of shells, and 4 launch tubes for anti-tank rockets. The strong point against the infantry however is the armor, impenetrable for many rockets. This type of tank is so advanced that the commander receives the various information in real time on a television display. But it is also very expensive, with the estimated budget being only 10 vehicles (the Terminator in an archive photo)

According to the experts, however, beyond the help that the Terminators will be able to give, the situation of the Russian vehicles on the field is in some ways disastrous. According to data provided by Western intelligence sources, Russia has an annual production capacity of around 250 tanks. In three months of war, with at least 500 tanks destroyed by Ukrainian forces, it would therefore have already lost two years of production

Moscow would still have the T-14 Armata cardthe Russian armored monster par excellence that would be invisible to radar: it has not yet made its debut in the war and Putin would have a hundred of them at his disposal. The T-50 stealth fighter, the Sukhoi Su-57, is also invisible: according to Russian state TV, “it is already operational” in Ukraine but, by definition, “not seen” (the Terminator in an archive photo)

The sanctions, however, would be putting the manufacturing companies in difficulty. Uralvagonzavod, which builds the Terminators and T-14s, announced in late March that it had to start layoffs. According to internal sources, the sanctions have created difficulties “also in terms of the supply of components”, which mostly come from abroad, especially high-tech ones (the Terminator in an archive photo)

The other giant of Russian war production, too, Almaz-Antey, he would be having difficulty in receiving payments and would not have been able to collect over a billion dollars in orders already. Despite this, he would have started the serial production of the S-500 Prometheus: these are the anti-missile and anti-aircraft defense systems that, according to Moscow, have already been delivered to the Russian forces (the Terminator in an archive photo)