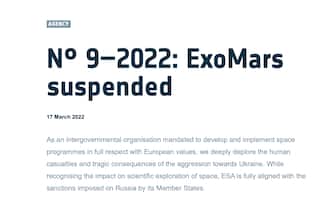 The tensions that were triggered after the Russian invasion of Ukraine also pass from the space missions. Europe has suspended the program that would have led her to land on Mars this year with Russia, as announced by the European Space Agency (ESA) with a statement at the end of the ESA Council in Paris. So what are the new scenarios?

The bridges of scientific and technological collaboration with Russia therefore collapse one after the other, and it is also at the expense of it Exomars, the most ambitious continental space exploration program in recent years whose purpose is to search for traces of life, past or present, underground

“ESA recognized thecurrent impossibility of carrying out the ongoing cooperation with Roscosmos (the Russian Space Agency) on the ExoMars rover mission – a note reads – with launch in 2022, and has instructed the Director General of ESA to adopt appropriate measures to suspend cooperation activities and authorized to conduct an accelerated industrial study to better define the available options for a way forward to implement the mission ”

THE SPECIAL OF SKY TG24 ON THE CONFLICT

But Roscosmos will be able to conduct the mission to Mars alone, even after the decision of the ESA Council. This was announced, writes Interfax, the director of the Russian space program Dmitry Rogozin. “We will lose several years, but we will copy our landing formwe will equip it with an Angara launch vehicle and we will conduct this research expedition from the new Vostochny Cosmodrome site independently “Rogozin said on Telegram

He then published a copy of the letter from the ESA director general, Josef Aschbacher, in which he informed of the decision to suspend the ExoMars project. “Indeed, this it is a very sad event for all space enthusiasts. This means that the joint Russian-European mission to Mars scheduled for September 2022 has been canceled, “said Rogozin.

With the exception of the Space Station, therefore, the collaboration between Europe, with all its member states including Italy, and Russia has now crumbled. In the meantime, however, they prepare new alliances and, if at the moment it is really early to understand what Russia will want to do, Europe and Italy are looking decisively at the United States

As for the bilateral collaboration between Italy and Russia, the suspension of the agreements is not arousing “no criticality”the president of theItalian Space Agency (ASI), Giorgio Saccoccia. “Fortunately, the projects in progress at this time resulted in activities of very little impact, being still in the definition phase”, he added.

We therefore look to NASA and in the meantime we reorganize ourselves, dealing with our own resources. Esa is doing it, for example, for replace the work done by Soyuz launchers, both those who left from Russian bases, both those that departed from the European base of Kourou, after that Russia withdrew the staff who worked there. The options are the new European launchers arriving: Ariane 6 and Vega C

Europe and Italy are also looking to their own resources for the future of ExoMars. “Now many roads are opening up and we still cannot say what will happen”, but we certainly foresee “very short times”, said Saccoccia, regarding the possible options for the future of the mission. In the photo: a view of the Martian soil taken by the telescope of the NASA Mars Reconnaissance Orbiter mission

Meanwhile, three Russian cosmonauts – Oleg Artemyev, Denis Matveev and Sergey Korsakov – from the shuttle Soyuz MS-21 they boarded the International Space Station to join American and German colleagues. As a gesture of solidarity with the Ukrainian people, upon arrival they were wearing jumpsuits in bright yellow with accents of blue, the colors of Ukraine

Three Russian astronauts on the ISS dressed in yellow and blue, the colors of the Ukrainian flag