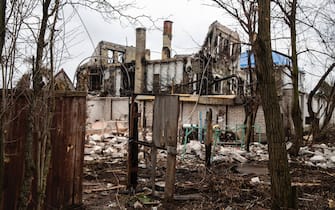 Among the various military forces employed in the conflict in Ukraine is the Wagner groupone Russian private paramilitary company born in 2014, rose to prominence because according to Kiev it would have been charged with killing Ukrainian President Zelensky at the beginning of the conflict. (In the photo: a mural celebrates the Wagner group in Belgrade, Serbia)

WATCH THE VIDEO: Rape as a weapon. The cases reported in Ukraine are increasing

According to Repubblica, the members of Wagner would be about 6 thousandof which one thousand already employed in eastern Ukraine where Russia has said it wants to concentrate its military operations against the Kiev army

Dragons in foreign press: “For Putin the time is not ripe to meet Zelensky”

The group would be composed, according to what Agi reports, from ex policemen and military. Their presence, as well as in the Donbass, was also reported in Syria, Libya, Central African Republic, Mali

Ukraine-Russia war, “Russian soldiers shoot down their own plane”

Officially the group it has no ties to Moscow and with President Putin: Western analysts, on the other hand, believe that contractors maintain close relationships with the Russian army and secret services

For Andrea Molle, sociologist of Chapman University of Orange interviewed by Rai News, “Wagner has been operating in Ukraine since its creation. He worked both in Crimea and in Donbass to promote Russia’s interests in the conflict between the government of Kiev and pro-Russian separatists ”

“Today the group would assist the military effort with infiltration and other operations typical of special forcesMolle said again. “According to Ukrainian government sources, among these it is worth mentioning the attempts to assassinate President Volodymyr Zelensky”

Attempts so far have been unsuccessful, which however they would not be the only failures of the group: according to Agi In Libya, Russian mercenaries supported the offensive on Tripoli launched in the summer of 2020 by General Khalifa Haftar but they ended up succumbing to the pro-Turkish militias intervened to the rescue of the national unity government of Fayez al-Serraj

On which is the their real danger, the experts would fluctuate: according to Repubblica they would be unscrupulous mercenaries, whom Moscow would often let do above all the dirty work, but at the same time there is those who consider their real effectiveness exaggerated

For Western intelligence, in fact, their sending to eastern Ukraine from Syria and Africa would seem “a rather desperate move“by the Kremlin