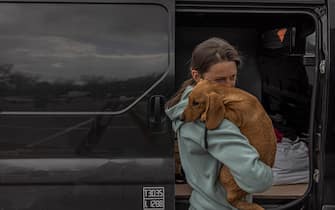 In the late evening of May 2, the first 100 civilians evacuated from the steel mill of Mariupol arrived in the city of Zaporizhzhia. The Ukrainian military police said they are mainly women, children and the elderly and that, in addition to food and medicine, psychological assistance would also be provided

At the points set up, people fleeing from other cities in southern Ukraine such as Melitopol

Some civilians arrived in vehicles where signs indicating the presence of children had been stuck. Natalia Usmanova, one of the people who had found refuge in the steel mill and managed to escape, said that after “two months of darkness” she finally won’t have to “anymore go to the bathroom with a flashlight”

War in Ukraine, Pope Francis: “I am ready to meet Putin in Moscow”

Not all people who were in the same condition as him were evacuated. Yesterday, Kiev had made it known that under the tunnels of the gigantic steel plant they were still there 200 peopleincluding 20 children, and that as soon as the first evacuation was completed, the Russia he had “started using all kinds of weapons”

War in Ukraine, who are the Italian foreign fighters fighting in Kiev?

According to reports from the Mariupol city council in the last few hours, the evacuation of civilians from the city should continue in the morning “With the support of the United Nations and the Red Cross”

War in Ukraine, which countries send weapons to Kiev and the threats from Moscow

Meanwhile, the deputy commander of the Azov battalion, Svyatoslav Palamar, said in an interview on CNN that he attacks on Mariupol I am continued “tirelesslywith artillery from tanks, bursts of fire, and every 3-5 minutes bombardments from the skies. “The offensive on the city was also confirmed by the Pentagon, which spoke of air strikes

Palamar also said that the food supplies are running low. “I can’t say for sure how much is left and for how many days, but I can assure that we are rationing.” “At worst, if we run out of food, we will hunt the birds and do whatever it takes just to resist,” he said.

In the last few hours, in addition to Mariupol, it was also attacked Odessa and fighting continued in Donbass. In the Russian region of Belgorod there were new explosions and in Kursk the authorities reported that part of a railway bridge collapsed due to “sabotage”. The Ukrainians instead claimed to have destroyed two enemy patrol boats near theSnake Island

According to the data provided by the UN, so far they are over three thousand civilians died because of the conflict. Meanwhile, the Kiev prosecutor’s office announced that it had formally identified the first Russian suspect in the Bucha massacres: Sergey Kolotsey, commander of a Russian National Guard unit. He allegedly killed four unarmed men and tortured another civilian

A couple from Mariupol arrived at the collection points in Zaporizhzhia

Civilians evacuated from the attacked areas