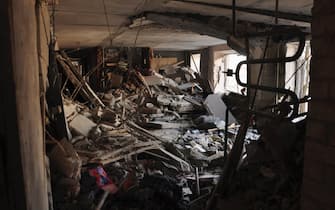 According to an investigation by the Guardian, carried out in collaboration with the network of investigative journalists Organized Crime and Corruption Reporting Project, some of the jets linked to the Russian oligarchs sanctioned in the context of the conflict in Ukraine they would continue to fly despite the restrictive measures

WATCH THE VIDEO: Ukraine, sandbags to protect monuments in Kiev

The survey is based on data from Flightradar24 and ADS-B Exchange, two sites specializing in flight tracking. The journalists involved specify that the reasons for these moves are not known and that it is not known if the oligarchs were on board when they were made. The very existence of these routes, however, could indicate the failure to comply with decisions taken against some individuals and Moscow

Ukrainian war, Russian oligarchs sanctioned thanks to photos of daughters and companions on social media

The Guardian writes that, for example, jets tied to Igor Shuvalov, former Russian Deputy Prime Minister, were caught flying after February 23, the day the EU imposed the first sanctions on Russia. More specifically, his Bombardier Global Express jet would have moved between Geneva, Munich, Paris, Milan and Helsinki after that date.

Ukraine, Draghi in foreign press: “For Putin the time is not ripe to meet Zelensky”

Among the planes there are also two jets that would be linked to the billionaire Alisher Usmanov. According to the Guardian investigation, they would depart from EU airports after Russian-owned aircraft, registered as Russian or controlled by Moscow, were banned from flying over the 27 member countries. The two aircraft in question would be an Airbus A340, which left Munich on the evening of February 28 – the day when Usmanov was included in the sanctioned list – and another jet that left Florence for Uzbekistan

When asked about this, a spokesman for the oligarch replied: “We deny any wrongdoing or attempt to prevent assets from being sanctioned. Since the MI-ABU jet you speak of is not owned or controlled by Usmanov, nor could it be used by him under lease terms, there is no legal basis for any prohibition in relation to the individual sanctions imposed against him. ”

And again: “As for compliace with the rules on departure, our detailed legal analysis found no violations. According to the information to our knowledge, the departure was made in accordance with the permission of the authority of the country from which the plane departed “

The Guardian also writes that the jets they would be tied to Roman Abramovich they were very active in the weeks following the invasion of Ukraine. One of these – the Bombardier Global 6000, LX-LUX registered – would now be ashore in Latvia, pending the Luxembourg authorities, where it was registered, to confirm ownership. If it is found that it belongs to the oligarch, it will be considered a frozen asset, writes the newspaper, quoting from the Latvian civil aviation agency

Among the special observers there is also Eugene Shvidler, a close associate of Abramovich. The Guardian writes that two of his jets were hijacked by UK authorities and that one of them departed from Biggin Hill on February 27. The same jet would also make a transatlantic flight and arrive at a small airport near New York before returning to Farnborough on March 4. His spokesperson denied any violations

The Guardian writes that among the planes that have made their way to the United Arab Emirates there are several who in the past had been linked to Abramovich as well as to Russian businessmen Andrey Guryev, Andrey Melnichenko and Oleg Deripaska

More specifically, a jet linked to Melnichenko would have flown to Dubai on 9 March. A spokesman for the oligarch, quoted by the newspaper, said that the Russian billionaire “has no connection with the tragic events in Ukraine” and that there is “no justification for placing it on the sanctions list”. A spokesman for Deripaska also made a similar speech: “The decision to sanction him [Deripaska] it has nothing to do with justice or the lawas well as the freezing of his assets and those of his family ”