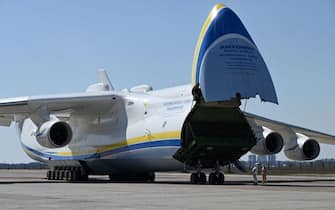 Built in a single example, the aircraft held the record for the longest aircraft ever and the one with the largest wingspan among the planes that actually entered service, while it is the third in terms of wingspan of all aircraft ever built.

“This was the largest aircraft in the world, the AN-225 Mriya (dream in Italian). But the Russians will never be able to destroy our dream of a strong, free and democratic European state. We will prevail,” he wrote on Twitter. Ukrainian Foreign Minister Dmytro Kuleba

The record-breaking plane was reportedly destroyed during the Russian attack on Hostomel airport, near the capital. Its repair would cost more than three billion dollars

The Antonov-225 Mriya was originally built to carry the launch vehicles of the planned Buran spacecraft, the Soviet response to the US space shuttle.

In 2009, the AN225 set a record for the largest element transported by air: a 189-ton generator destined for a gas-fired power plant in Armenia

Data from the Flight Radar monitoring site confirm that after February 5, 2022 the Antonov AN225 Mriya was at Gostomel airport and no longer performed any flight missions

Anatoliy Fedoruk, mayor of Bucha, a city 4 kilometers from Gostomel, also confirmed the destruction of the plane: “After the fifth air raid, the Mriya was completely bombed. It happened on the first day of the invasion (February 24). They fired from helicopters ”

The aircraft has been actively used during the Covid-19 pandemic for the past two years. In April 2020, he delivered 103 tons of drugs from China to Kiev to fight the coronavirus