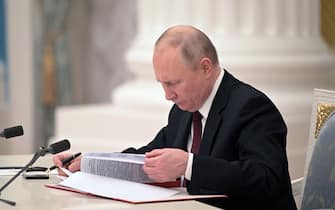 “Anyone who tries to create obstacles and interfere know that Moscow will answer with consequences never seen before. We are prepared for anything “. These were the words of Vladimir Putin in the speech in which he announced the invasion of Ukraine at dawn on February 24th

Words that in the minds of many have done spring the fear of an atomic threat. Russia is one of the two major world nuclear powers and in recent months he has mentioned it several times with the his exercises

Russia-Ukraine war, from trucks to banks: what are the sanctions against Moscow?

The nuclear weapons they were also brought by Putin as one of reasons of the invasion: “The possibility that Ukraine have tactical nuclear weapons constitutes a strategic threat to Russia “, said the Russian president, stating that Moscow” wants the demilitarization of Ukraine ”

Draghi, the speech on Russia-Ukraine: “Impact on our economy, energy worries”

The Ukrainian Foreign Minister responded to the accusations from Moscow, Dmytro Kuleba, who pointed out that his country he has no plans to obtain nuclear weapons

Russia-Ukraine, the repercussions on sport: stop in the Champions League final and F1 GP in Sochi

Russia joins the Non-Proliferation Treaty Nuclear (Tpn), sanctioned in 1970with which countries have begun to coordinate their commitment to reduce their nuclear arsenals after Cold War

Russia-Ukraine, clashes near the Chernobyl nuclear power plant: what are the risks

In 2010 then USA and Russia signed a further agreement, extended until 2025on nuclear weapons, the “New Start “which establishes the atomic weapons limit which can be owned by the two superpowers to 1,550

But the limit set by the agreement only applies to warheads and atomic bombs. Not included are i short and medium range missiles and the tactical nuclear weapons

This is why the atomic arsenals of Russia and the US are much larger. According to the International Peace Research Institute (Sipri) of StockholmThe United States and Russia hold the 90% of global nuclear forces

According to the latest data from 2021, the United States has 5,550 warheads nuclear of which 1,800 already deployedthat is, already placed in missiles or located in military bases with operational forces

According to Sipri, Russia has an atomic arsenal of 6,255 weaponsof which 1.625 in the operating units, therefore ready for use. Among Russia’s nuclear-capable weapons are the two hypersonic cruise missiles “Kinzhal” and “Zirkon”

Another type of missile is called “YarsWhich recently was part of a ballistic drill up to Kamchatka. Then there is no shortage submarines, bombers and intercontinental missiles ground-based, such as “Iskander”Which in an exercise started from the steppes around Astrakhan

In addition to Russia and the US, it reports the Presshave atomic arsenals Great Britain (215), la France (300) and the China (280) who adhere to the Tpn. Pakistan (150), India (140) and North Korea (20) instead they do not adhere to the non-proliferation pact