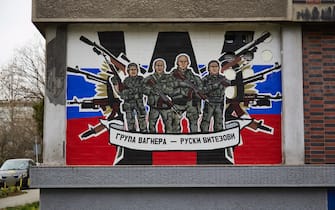 On eastern front of the Donbassin Ukraine, i mercenaries of the Wagner group they are taking up fighting positions on the front line, making up for the huge losses and the personnel shortages of the Moscow army: to say it is the last report of theBritish intelligencepublished in the Guardian

WATCH THE VIDEO: War in Ukraine, stories of farmers under bombs

Officially – Agi reports – the Wagner group does not exist: there is in fact no headquarters, registration or organization chart. The presence of this small army of Russian contractors, many of them they cut their teeth in the Donbass Ukrainian alongside separatists, however, has been reported in various crisis scenarios

War in Ukraine, over 7 million refugees. MAPS AND GRAPHS

Among the most significant are Syria, Libya, the Central African Republic and Mali. Simply called “Company“by the former policemen and former soldiers who compose it, like other Russian private military companies of lesser reputation is a an important element of Russian international strategyalthough the Kremlin denies any relationship

Vladimir Putin commented on the information on the presence of the “Company” in Cyrenaica stating that “even if there were Russian mercenaries in Libya, these they are not paid by Russia and do not represent Russia”

The Western analysts, however, are different notice and they believe that the contractors keep close relations with the Russian army and secret services in order to allow Moscow to pursue certain interests without having to answer for its own actions

The goal, according to Catrina Doxee of the Center for Strategic and International Studies (CSIS) in Washington, is “allow Russia to extend its geopolitical influence and restore the agreements obtained before the fall of the Soviet Union. “” There is an African policy of Russiaespecially in the traditional French area of ​​influence “, confirmed Djallil Lounnas, researcher at the University of Al Akhawayn in Morocco

The contractors of the ‘Company’ have been accused of abuses and violations of human rights. In particular, the UN is investigating an operation of the Central African armed forces and of Wagner’s men, directed against the rebels, in which, last January, at least 30 civilians would have lost their lives

The CSIS, between 2016 and 2021, has found “clear evidence” of the presence of Russian private military companies in Sudan, South Sudan, Libya, Central African Republic, Madagascar, Mozambique. According to other sources, Botswana, Burundi, Chad, Comoros, Democratic Republic of Congo, Republic of Congo, Guinea, Guinea-Bissau, Nigeria, Zimbabwe are added to the list of African countries involved in the Moscow mercenary network. And the Mali, where 800 Wagner men would operate

THE results in the field of the Wagner group however, they would not always be up to it. In Libya, Russian mercenaries supported the offensive on Tripoli launched in the summer of 2020 by General Khalifa Haftar but they ended up succumbing to the pro-Turkish militias intervened to the rescue of the national unity government of Fayez al-Serraj. And In Mozambique Wagner’s contractors ended up retreat in the face of the advance of ISIS only to be replaced by South African departments

Only partial effectiveness that however, it would have its own logic: “If a country employs them to train its troops, it is in their fundamental interest perform their duties just enough to continue to be employed“, Catrina Doxsee added.” If they could resolve the conflict, they would no longer be needed. ”