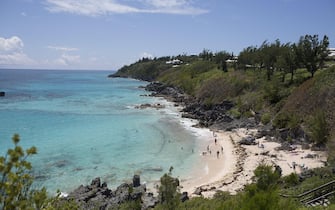 There are now numerous sanctions issued by various countries against Russian oligarchs in response to the war in Ukraine. But most of them have been transferring their wealth offshore for years to tax havens like the British Virgin Islands, Bermuda (in the picture)Cyprus and other jurisdictions that offer one shield even against the measures imposed by the West

WATCH THE VIDEO: War in Ukraine: there is still no European agreement on sanctions

To report it is the Washington Post in an analysis based on secret documents contained in Pandora Papers and in Paradise Papers. According to the newspaper, Vladimir Putin on February 24 – the first day of the invasion of Ukraine – he called 37 oligarchs to explain to them that his military action was one “necessary measure” and to discuss the sanctions he knew would come

The oligarchs summoned are loyal supporters of the Russian economy, of which they represent the key industries (gas and oil, banks, chemicals, metallurgists), but their fortunes have long been out of the country

The case of the 6 Russian oligarchs who died in the last 3 months: 4 were Gazprom leaders

It is estimated that at least $ 1 trillion of Russian wealth are kept in companies offshorea figure equal to that held by the entire Russian population within the borders. Putin he often preached against this practice, evoking tax evasion and money laundering of money, but in fact tolerated it and he would have taken advantage of it too, according to some experts

Ukrainian war, Russian managers on the run: the vice president of Gazprombank leaves the country

Of the oligarchs present in the Kremlin in February, all but two sanctioned by the West, more than half have direct links or through close family members with offshore company that manage transactions (difficult to trace) for hundreds of millions of dollarsmaking financial investments, making loans and creating family trusts

Putin, the relationship with the oligarchs and how it affects the war

One way not only for evade taxes but also to protect their assets from inquiriesby the tax authorities, come on tycoon rivals, from financial predators that are also hidden within the Russian state. And give it sanctions

At least 21 of the participants or their families they have holding at British Virgin Islandsto Cyprus and other places known for financial secrecy and tax advantages. Between them Vagit Alekperovformer president of Lukoil, Andrey Akimovpresident of Gazprombank, German Grefhead of Sberbank. (In the photo German Gref with Vladimir Putin)

Come on Pandora Papers it also emerges that the oligarchs summoned to the Kremlin have used their offshore companies for a wide range of projects and activities. There is no shortage of yachtsuch as the $ 600 million one Andrey Melnichenko (in the picture)in the name of a company registered at Bermuda

And i jetas the $ 65 million Gulfstream G650 from Leonid Mikhelson (in the picture)held by a company of the Isle of Manwhich is a subsidiary of his other company a Panama. It also happens that the oligarchs land together in the same tax havens, opening common companies

“The offshore financial system has allowed to Putin and his associates to protect the wealth they have stolen from Country without laws they created “, accused the US deputy Tom Malinowski (in the picture), author of numerous proposals to strengthen American investment laws. “We denounce the corruption he abuse of human rights in Russia but we have drawn up the Red carpet for Putin’s friends who benefit from that corruption and abuses ”