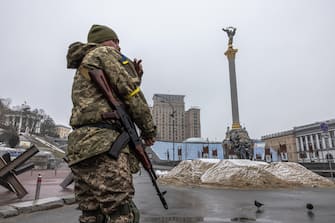 One million people fled Ukraine since Russian forces have invaded the country. This was announced in a tweet by the UN High Commissioner for Refugees, Filippo Grandi. In the photo: military in Kiev

WATCH THE VIDEO: UN, almost 836,000 refugees who fled the conflict

“In just seven days we have witnessed the exodus of one million refugees from Ukraine to neighboring countries. For many millions more, inside Ukraine, it is time for weapons to be silent, so that vital humanitarian assistance can be provided, “wrote Grandi. In the photo: Ukrainians arrived in Poland

The countries where most of those fleeing Ukraine go are Romania, Hungary, Poland, Moldova and Slovakia, but also Germany. And Italy in turn is preparing for a massive reception. Pictured: refugees in Poland

THE SPECIAL OF SKY TG24

In Romania on March 2, as reported by cotidianul.ro, they were 16,000 Ukrainian citizens to cross the border (7% less than the previous day). Many have already left it to join their families scattered in various Western European countries, but many others have remained, receiving the solidarity of the Romanian population. In the photo, refugees in Hungary

The German government on the other hand, it does not provide forecasts on the flow of Ukrainian refugees arriving in Germany from the war. Pictured: Berlin station

According to initial estimates, they are over 5,000 refugees have already arrived in the country and they will not have to apply for asylum, thanks to the simplification of procedures established in recent days. In the photo, the arrivals of refugees in Germany

Another image from the Berlin station

In the night between 1 and 2 March Ukraine and Poland have opened the crossings for those fleeing from war. In the photo, a refugee center in Warsaw

As of February 28, nearly 108,000 people and 15,000 vehicles had crossed the western borders of Ukraine. In the photo, Ukrainians in Krakow

Another image of the Ukrainians who arrived in Poland