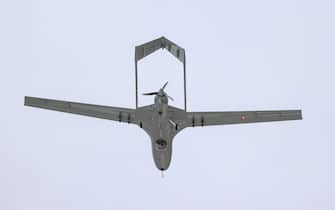 There is one device that is attracting a lot of attention in the conflict between Russia and Ukraine: is the Turkish drone Bayraktar TB2. He is allowing Kiev to destroy Russian artillery systems and armored vehicles. And this factor has made “the whole world” a customer. At least, according to the creator of the drone, Selcuk Bayraktar, as he writes Reuters

WATCH THE VIDEO: Ukrainian War, the Turkish drones that everyone wants

Selcuk Bayraktar, who runs the Istanbul company with his brother, said drones have shown how technology is revolutionizing modern fighting

THE ARTICLE OF THE REUTERS

The rest of the Bayraktar TB2 had already talked about the New Yorker, in early May, branding it as “The Turkish drone that changed the nature of war”

“The Bayraktar TB2 is doing what it was supposed to do: remove some of the most advanced anti-aircraft and artillery systems and armored vehicles, ”Bayraktar now explains

But how is the drone made? It has a wingspan of 12 meters and can fly up to 25,000 feet before destroying tanks and artillery with laser-guided armor-piercing bombs. It has also been used in conflicts in Syria, Iraq, Libya and Nagorno-Karabakh

The Turkish president Tayyip Erdogan said the demand for drones is very high. But Bayraktar said he can currently produce a maximum of 200 TB2 drones per year

In the photo, Bayraktar TB2 drones on the runway

In the photo, the drone in the Turkish base of Incirlik

Another image from Turkey, in 2021