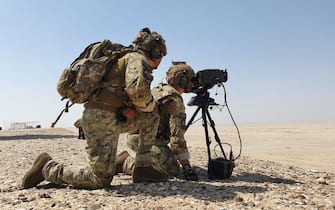 The Italian government has decided to send in Ukraine weapons and military equipment to help Kiev defend itself from the attack by Russia. The details on the supplies are attached to the decree law and the estimated value should be between 100 and 150 million euros

The list includes missiles, bombs, mortars, machine guns. The decree approved by the government provides for a direct delivery. NATO will only provide for the logistics part

Ukrainian war, ok to EU agreement for the temporary protection of displaced persons

A airlift and then there will be an overland transfer to Kiev. NATO will be able to supervise, but will not enter Ukraine. One of the hypotheses is that i contractorprivate paramilitary companies that provide specialized military advice or services

Russia-Ukraine negotiations, what Moscow and Kiev are asking for

The Stinger it’s a surface-to-air missile system short-range, which is used against aerial threats at very low altitudes

It consists of a missile tucked into a launch tube, it has a heat-seeking warhead and the soldier carries it on his shoulder and can aim at the target

THE mortarson the other hand, they are curved-fired artillery pieces, useful for hitting a target placed behind a vertical obstacle

The Browning heavy machine guns they are believed to be effective in repelling lightly armored vehicles, boats, light fortifications, and low-flying aircraft

Twenty states out of the 27 of the EUto which are added the United Kingdom, the USA and Canada, have chosen to supply the Ukrainian resistance with war material to curb the advance of Russia