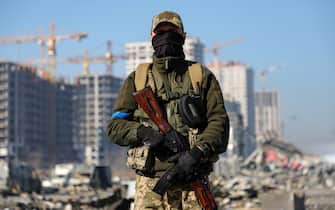 The support of Western countries forUkraine it cannot pass for offensive military action. It would mean going directly to war with Russia. However, since the invasion of Moscow troops began on February 24, many states have added spending items to their budgets to provide military aid in Kiev. There are those, like Italy, who have donated both offensive and defensive material and those, like Ireland and Austria, for the moment have limited themselves to sending only protective equipment, such as bulletproof vests and helmets.

WATCH THE VIDEO: The weapons sent to Ukraine by the US and the EU

The United States has allocated two billion dollars for military aid to Kiev. Nine hundred million from the European Union

The list of weapons donated by theItaly And classified. However, it is known that Rome has sent Stinger surface-to-air missiles, anti-tank weapons, mortars, heavy and light machine guns, Browning weapons, helmets and vests to Kiev.

From the Germany instead, 1,000 Panzerfaust 3 anti-tank missiles and 500 Stinger surface-to-air missiles arrived

The UK sent 2,000 NLAW anti-tank missiles to Ukraine. Added to these are Stinger portable anti-aircraft missiles, as promised weeks ago by London. This was confirmed by British Defense Minister Ben Wallace

Zelensky: “On sending weapons to the West without courage”

The decision of the Sweden to help Ukraine with 5,000 anti-tank weapons. Stockholm is not part of NATO and is neutral by tradition: it has not sent military aid to foreign countries since 1939, as premier Magdalena Andersson underlined

War in Ukraine, Conte: “M5s will vote no to increase military spending”

From Javelins to drones, the weapons used by Kiev against the Russians

It limited itself to sending defensive material to theAustria, which in 1955 declared itself neutral in international disputes. He sent bulletproof vests, helmets and fuel to Ukraine. So he also did theIreland

Those who, on the other hand, from within the European Union, have opted for a firm no to military aid is theHungary by Viktor Orbán. Not only that: even the weapons donated by other countries do not pass through Budapest