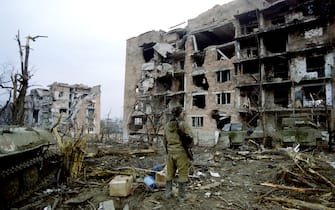 There war in Ukraine he also saw among his soldiers some Italian citizens. Be on the side of the forces Ukrainian armiesboth from that of pro-Russian of the separatist republics, is from 2014 that the presence of Italian foreign fighters

WATCH THE VIDEO: Ukrainian War, the foreign fighters of the International Legion

It is the case of Andrea Palmericalled “the generalissimo” and exponent of the far right, former head ultrà of the Bulldogs of Lucca. He has enlisted since 2015 in the pro-Russian military groups, in the Dnl of Lugansk and since then turns out to be in Ukraine. IS fugitive with two convictions, a of these for recruitment and the recruitment of pro-Russian soldiers

Ukrainian war, the number of dead Russian generals rises. Why are they sent to the front?

There was also a fight on the side of the pro-Russians (already from 2015) Edy Ongaro46 year old Venetian killed on March 30 from a bomb while fighting with the Donbass separatist militias. So far, the only known dead Italian “fighter”, intelligence sources report

Edy Ongaro, the father of the militiaman killed in Donbass: “I can’t give myself an explanation”

Ongarowhich was part of the Northeast Red Star Collectivewas in the Donbass since 2015after leaving Italy in a hurry, formally like wanted for assault. In Donbass, already at the time, it was enlisted with the separatists of the Prizrak brigade, composed mainly of foreign fighters

Putin and the “total war” against Ukraine: this is what can change from 9 May

His nom de guerre was “Bozambo”. Ongaro lost his life in Adveevka village, in the Donetsk region, on the northern border. According to information received after his death, the Italian was in a trench with other soldiers when a hand grenade killed him

Tactical weapons, what they are and how they are used

Is returning to Italy, after surviving to the Russian attack on MariupolIvan Luca Vavasorithe former footballer of 29 years old who had gone to fight in Ukraine in the international brigades alongside the Kiev army

War in Ukraine, the Italian fighter Vavassori: “I’m fed up, I want to go back to Italy”

“I am tired, that’s enough for me. Time to go home I no longer have the head to go on “, said Vavassori who in recent days had been hospitalized with a high fever and some injuries. As far as has been known, the young man in these hours would be effectively leaving Ukraine

On the affair the Milan Public Prosecutor’s Office has opened a fact sheet to understand if there are or not illegality profiles behind the young man’s choice to enlist. In these cases, crimes can only be charged for recruitment And enlistment or if you act like mercenaries in exchange for money. The father explained that the son has freely decided and independently to go and fight

Also Giulia Schiff, former Air Force pilot, since the beginning of the war she has been in Kiev to fight as a volunteer in the Special Forces of the International Legion in Ukraine

The pupil of the Academy of Pozzuoli had been expelled from the Air Force after having repeatedly reported being a victim of hazing during his “baptism of flight”. After a long legal battle, the State Council he had rejected his appeal putting an end to his racing career

“I’m here because I don’t want there to be war. And if you manage to stop here, you won’t get home. What if I stay until the war is over? Yes, I’m not planning on coming away, “said La 23 years old former Air Force pilot in a service of the Hyenas

Finally the Russian Ministry of Defense, as the Corriere della Serawould have sent the news to Palazzo Chigi of the killing of 11 foreign fighters of nationality Italian in operations against Russian forces. However, qualified Italian intelligence sources have stated that allo Status “does not appear”, specifying that “checks are in progress”