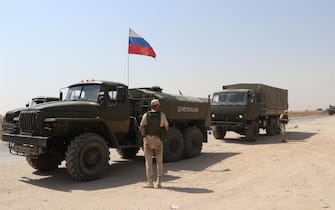 After the rumors of recent days, the confirmation came directly from the head of the Kremlin, Vladimir Putin: the Middle East and, in particular, the Syria in war, in economic collapse and dominated for years by the Russian military presence, they are the privileged basin of Moscow from which to draw militiamen to be sent to the Eastern European fronts

WATCH THE VIDEO: Ukraine, volunteers from all over the world to fight with Kiev

Putin and Defense Minister Sergei Shoigu (pictured) spoke of “volunteers“and not salaried fighters. It is estimated that there are 16 thousand militiamen ready to move from the Middle East to Ukraine. “If you see that there are people who want to voluntarily help the separatists of eastern Ukraine, then you have to meet them halfway and help them move to the combat zones,” Putin told his minister.

“We obviously believe that it is right to answer these questions, as these people they don’t want money, but they speak from the heart“said the Russian minister Shoigu (pictured) pointing out that many of them have fought against ISIS in the last decade

War in Ukraine, thousands of Syrian fighters are also arriving to help Russia

For days, however, there have been rumors of the start of a real one enlistment by the Russian representatives in Syria of young and old, ready – for a fee in dollars – to be sent to Ukraine to fight alongside the pro-Russian separatists. According to Corriere della Sera reports, many would have been promised amnesty of Assad for those who fought against his army in the civil war

War in Ukraine, Moscow and Kiev accuse each other of having chemical weapons

Russia and Turkey have already used in the past cheap Syrian fighters to be sent to Libya and the Caucasus. For its part, Iran has mobilized Iraqi, Afghan and Lebanese Shiite jihadists in Syria. For now, the focus is on the possible Russian recruitment of Syrians

In Poland, volunteers from all over the world to fight with Ukraine

Russia has been militarily present in Syria since 2015 and has been linked to the Damascus government for half a century a strategic military, political and diplomatic alliance. Putin’s intervention in the Middle East conflict has allowed the disputed President Bashar al in recent years Assad to remain in power after eleven years of armed conflict and to be confirmed as head of state at least until the next elections in 2028

To those who think that Assad (pictured) can now return the favor to Putin, local analysts recall that the Syrian fighters who can be sent to Ukraine they do not belong to the regular army of Damascusbut to a plethora of militiasnot necessarily controlled by the government, created in recent years by the same Russian cadres in Syria and by local warlords, affiliated with the Moscow forces

War in Ukraine, NATO-Russia escalation risk on the border with Poland: the scenarios

Among these there are thousands of former militiamen of the dissolved Bustana paramilitary organization created in recent years by Rami Makhluf, cousin of President Assad ousted from power a year and a half ago. With Makhluf’s fall from grace, Bustan’s young and old militiamen joined other armed groups, but many others were left without pay. Next to them are also the fighters of the Syrian 5th Army Corpsorganized and financed by Russia, and operating in several theaters of the Syrian war

According to some sources, the Russian emissaries – including representatives of Wagner – have proposed to the aspiring Syrian mercenaries a contract worth a thousand dollars a month, for an ongoing commitment in Ukraine for seven months. Others reported more modest deals: $ 400 a month, with no commitment to stay long at the front

According to Al Monitor magazine, which first collected testimonies from independent Syrian organizations, the lists are presented to the Russians and whoever is accepted must undergo a short training