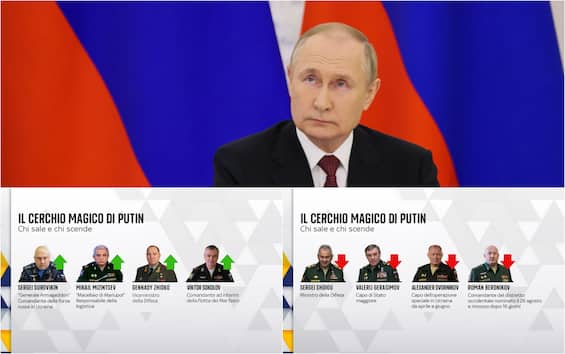 After the failures on the ground in Ukraine, and the attack on the bridge in Crimea, the rifts between the Russian secret services and the military are becoming more and more evident. So much so that people start talking very insistently about the hypothesis of purges within Vladimir Putin’s magic circle. (WAR IN UKRAINE: THE SPECIAL – LIVE UPDATES)

The most radical soul

Among those who seem to be gaining influence are more radical souls like Evgenij Prigozin, a wealthy oligarch and financier of the paramilitary group Wagner. And then there is the Chechen leader Ramzan Kadyrov, who repeatedly in the last period has widely criticized the work of Defense Minister Sergei Shoigu for the military tactics in the so-called “special operation” in Ukraine.

Among those who failed, however, is the Minister of Defense, Sergei Shoigu, for whom there was also talk of the hypothesis of imminent resignation. Also in the balance are the chief of staff, Valerij Gerasimov, Alexander Dvornikov, head of the “special operation” from April to June, and Roman Berdnikov, commander of the western district appointed on August 26 and removed after 16 days.

Among those promoted, however, is the new commander of the Russian forces in Ukraine Sergei Surovikin, nicknamed “General Armageddon” for how he manages operations on the battlefield. And then the “butcher of Mariupol” Mikail Mizintsev, the Deputy Minister of Defense Gennady Zhidko and the interim commander of the Black Sea fleet Viktor Sokolov.