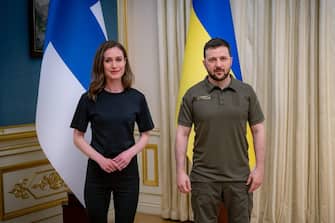 Zelensky reiterated how important they are for Ukraine the unit on sanctions against Russia and support forEuropean integration. “This – he specified him – is what can guarantee strength in the defense of our land”

Ukrainian war, Zelensky: “Arms in Kiev are an investment for stability in the world”

As reported by local media, Zelensky during the meeting with Prime Minister Sanna Marin also addressed the Finnish parliament and invited the Scandinavian country to participate in the reconstruction of Ukrainewith particular attention to the field ofinstruction

The Finnish premier met Zelensky a Kiev at the end of his day of visit to Ukraine. Sanna Marin arrived in the country this morning and went to the places that have become a symbol ofRussian invasion

Ukraine, destruction around Kharkiv: trip to Mala Rohan. The reportage

Marin visited Irpin And Buchatwo of the cities where the massacres of civilians and other possible ones are investigated war crimes. “We showed the consequences of the ‘Russian peace’ left by the occupiers and discussed the issue of assistance in the reconstruction of our city, “said city council secretary Angela Makeyeva who thanked Finland for imposing sanctions against Russia, military support and assistance

Russia-Ukraine War, from Mariupol to Kharkiv: images of the destroyed cities. PHOTO

There Finlandas well as the Swedenhas taken an important step in its traditional defensive neutrality by deciding to apply to join the Born. The decision was made following the Russian invasion of Ukraine, an important choice not only from a political but also from a military point of view

Sweden and Finland in NATO: what would change at the military level for the Alliance