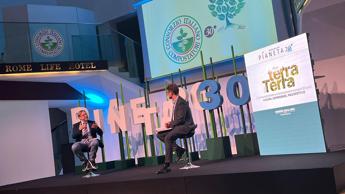 Over 100 million tons of Organic waste collected, transformed into 35 million tons of compost, with 65 million tons of CO2 equivalent avoided. These are some of the results obtained in the first 30 years of activity by the Cic, Italian composting consortium. The anniversary was celebrated at the Nazionale Spazio Eventi in Rome with the event “1992 – 2022 | From earth to earth. The Italian Composting Consortium turns 30. Visions, experiences, perspectives “. During the event, the Cic took stock of the bioeconomy in Italy and, in particular, on the biowaste supply chain which, from organic waste, is able to produce renewable fertilizer such as compost and sustainable fuel such as biomethane.


In Italy, the collection of the organic fraction (wet and green) represents 40% of municipal waste collected in a differentiated manner and in particular in the last decade there has been an average increase in interception of 7% per year. From the transformation of waste organic matrix, in 2020 approximately 2.18 million tons of compost and 370 million cubic meters of biogas were obtained; the latter were in turn enhanced through the production of approximately 437.5 MWh of electricity, 128.7 MWh of thermal energy, and 93 million cubic meters of biomethane for automotive use.

In 2025, more than 9 million tons of organic fraction per year

With a waste sorting fully operational throughout Italy and considering the overall trend of the resident population, the CIC estimates that the country could produce more than 9 million tons per year of organic fraction in 2025, bringing the biowaste to 13,000 employees, generating around 2.5 billion euros of related activities.

For what concern plant systemin Italy there are 359 plants (294 for composting and 65 which include an anaerobic digestion section), whose authorized capacity available for the treatment of wet and green amounts, in 2020, to approximately 9,300,000 tons / year, higher than only to the waste collected in the same year but also to the 9,077,000 tons / year that will be reached once the differentiated collections on the national territory have been completed.

“In our country, the supply chain of recovery of organic waste has reached the substantial balance between the request for conferral of organic waste producers and the treatment capacity of the plants ”, explains Massimo Centemero, director of the CIC. Companies, both public and private, are moving in the right direction and also in the Center and South, areas still lacking dedicated plant engineering, are working to expand or build new integrated plants with relative production of compost and biomethane.

Energy crisis and independence, the role of biomethane

There war in Ukraine has in fact highlighted Italy’s extreme dependence on raw materials and energy, as well as the need to promote and encourage the diffusion of gas renewable and low carbon emissions, among which biomethane stands out for its availability.

“This is a path that provides for progressive growth, and for this reason we hope that the choice of producing biomethane is not only a temporary response to an energy emergency, but becomes a structural pillar of national and European energy policy”, comments Massimo Centemero , director of the Cic.

The analysis of the sector also continued with the presentation of the book “Biowaste pillar of ecological transition”, by Massimo Centemero, Director of the Italian Composting Consortium (Cic) with the collaboration of Alberto Confalonieri. The book – published by Edizioni Ambiente and third edition of the Organic Biorecycling series – also collects the results of the monitoring program that the CIC has been carrying out since 2008 for the verification of the quality of separate collection and tests conducted with quality compost in collaboration with centers of study and university. Last but not least, a look at Europe and the world to realize how Italy is a virtuous country, mentioned for example in numerous international experiences.

“Our analyzes have shown how extraordinary results have been achieved in recent decades: certainly we must not stop now, because there is still work to be done, especially with regard to improving the quality of the wet fraction, which passes through awareness of citizens and the commitment of institutions ”, underlines Massimo Centemero, director of the Cic.

“We are proud of what we have achieved in these 30 years, of the studies, the goals and the role achieved by the Consortium in the circular economy of our country and the success achieved by the Cic Quality Compost Brand, the first voluntary compost quality verification program : a useful tool both for manufacturing companies, which monitor the quality of their product continuously and in constant comparison with Cic technicians, and for final consumers (farmers, gardeners or private citizens), who can count on an additional guarantee the quality of the compost purchased and used “.

“The next few years – concludes Centemero – will see the CIC face great challenges for the sector and for the whole of Italy. The climate crisis and the shortage of raw materials are showing all their concreteness and compost will play a crucial role in restoring organic substance to the soil, thus counteracting desertification and allowing to maintain high levels of soil fertility “.