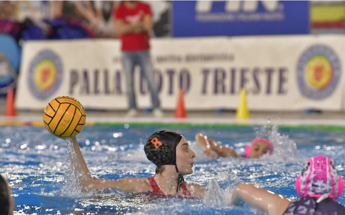 SIS Roma wins group A of qualification for the Italian Cup Finals. In the challenge for the first place he overcomes Waterpolo Trieste for 15-6. Meanwhile, next Saturday 22 October the top league starts, the first match again with the Triestine will be at the “Babel” swimming pool (7 pm) the sports center at Infernetto (Via Traetta n ° 70) where the Roman team has moved


SIS Roma starts off on the right foot. She qualifies with full points for the women’s water polo Italian Cup finals and with great authority she imposes herself in her group, showing already a good understanding reached.

Twice, with Brizz and Como, he scores 21 goals, overwhelms the hosts of Florentia for 17-1 and finally celebrates with Trieste, winning the challenge for first place for 15-6.

On the eve of the start of the next A1 women’s championship, it is a good start to the new season.

Coach Marco Capanna, however, throws water on the fire and remembers: “… at this moment we have shown that we have something more than our opponents, but we must also show it in the finals. Winning now is moral and serves to do well also in the rest of the Cup, but the road is still long, I am satisfied but aware that we are only at the beginning. In the semi-final of the Cup, for example, due to the crossings, we will most likely have to deal with Orizzonte Catania, the reigning Italian champion. Then there is the Plebiscito Padova which won the other grouping. For the championship I would also include Trieste itself and Rapallo ”.

In the meantime, the championship is upon us and in the first two days the Roman team will find itself in front of Trieste and will then face the away match in Rapallo, a double test to be taken with the springs, despite the cup victory with the Friulians, it is of two tough and not at all compliant opponents.

“I repeat what I have said in recent days. – continues Capanna – It is a championship leveled at the top. I am convinced of our means and that we can still improve our performance. The young women we have included in the first team are doing well. In Florence, for example, we made up for the absence of the important player Sofia Giustini (injured in training), we finished well in defense and especially today, in the match against Trieste who had not played in the morning, I wanted to understand the state of girls shape. Two games within a few hours with Serie A1 associations are an important test that we have passed with flying colors. I am also satisfied with Andrews, the Australian who strengthened our squad, who showed the right mental attitude and a great ability to adapt to different roles. She was her first official outing in Italy, she showed the right character and attitude, she will be very useful for the whole Championship ”.

Foul limit exits: Milicevic (B) and Carosi (S) in the third half.

Exit due to the limit of fouls: Merli (F) in the fourth time.

Notes: No exit due to foul limit.

Foul limit exits: Vukovic (T) and Di Claudio (S) in the fourth half