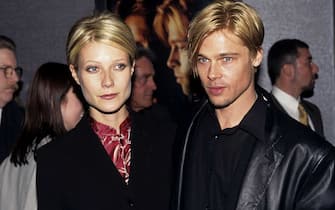 Brad Pitt and Gwyneth Paltrow they were one of the symbolic couples of the nineties. They were linked from 1994 to 1997 and today, 25 years later, they are still very closely linked

Tom Cruise and Nicole Kidman they were for a little over ten years as a Hollywood gold couple. The two actors married on December 24, 1990 and divorced in 2001

Top Gun, the cast of the film: the comparison between yesterday and today PHOTO

Gisele Bündchen and Leonardo DiCaprio they were together for five years, to say goodbye at the end of 2005

Harry Potter, here is the “real” appearance of the characters according to the descriptions of the books. PHOTO

Cindy Crawford and Richard Gere they were one of the most loved and iconic couples of the 90s, for their beauty and their talents in their respective fields of work. The supermodel today has two children: Presley and Kaia, but neither of them was born of love with the actor. The two were in fact married from 1991 to 1995, but did not have any children. She was 17 years younger than him and this was perhaps one of the causes of their breakup

Johnny Depp and Winona Ryder si met in 1989 and their love literally drove Hollywood crazy. The two have come close to marriage after a much envied relationship. Relationship that ended in 1993

Sienna Miller and Jude Law they met in 2002 on the set of the film “Dreams of Glory – Raf’s Revenge”, directed by Jeff Jensen. A great love, many separations and a series of betrayals followed since then until 2011 when the couple said goodbye for good.

The small part played by Brad Pitt in “Friends” who is a high school friend of Jennifer Aniston unites them in series and in life. They get married and are happy. But then a girl arrives, that Angelina Jolie and the dream vanishes

Patsy Kensit and Liam Gallagher they married in 1997 and their son Lennon was born from their union. To announce the end of the marriage was the same Liam who, quite drunk, from the stage of Wembley Stadium in London during a concert by Oasis

The former spouses Gwyneth Paltrow and Chris Martin, parents of Apple (born in 2004) and Moses (2006), formed one of the most beautiful and beloved couples in the jet set. In 2014 they decided to separate

From Annie Lennox to Sade, what happened to the pop stars of the 80s. PHOTOS

Ethan Hawke and Uma Thurman they married in May 1998 and remained husband and wife for six years. Two children were also born from their union, Maya Ray in 1998 and Levon Roan. The two separated in 2004, only to officially divorce in 2005. The actor recently admitted that he had a terrible time, on a personal level, when he had to divorce Uma.

Monica Bellucci and Vincent Cassel they have been together for 17 years, unanimously considered one of the most iconic couples in the world of cinema in the 90s. Their marriage ended in 2013

26 children of famous people equal to their parents. PHOTO

Jim Carrey and Renee Zellweger they met on the set of “Me, me & Irene” and were engaged for a year, from 1999 to 2000. Then the separation and for the American actor one of the most difficult periods of his life began

From Simon Le Bon to Billy Idol, what happened to the singers of the 80s

Sean Penn and Charlize Theron they got engaged in 2014. The relationship, however, did not work out and ended after just one year

Jason Momoa and Lisa Bonet: the story of the couple in 16 photos, from the beginning to the breakup

In 1995 Michael Keaton and Courteney Cox they break up after six years of love. At the time Keaton was famous for playing the Batman saga in the cinema, while Courteney Cox was the unforgettable Monica Geller in the sitcom “Friends”

Intellectual and at times crazy, for some even neurotic. What is certain is that Diane Keaton and Woody Allen they were, and still are, the most successful couple in 1970s American cinema. A love story, theirs, which lasted a short time but which changed the perception of the two forever and linked them indissolubly for life, as evidenced by the friendship still in progress.

They remained on excellent terms, Demi Moore and Bruce Willis. The actor, recently struck by aphasia, can count on the support of his ex-wife, with whom he has three daughters. They were married from 1987 to 2000 and continued dating after their divorce

Bruce Willis suffers from aphasia: the actor can no longer act

The Canadian actor Ryan Reynolds today he forms with Blake Lively one of the most close-knit couples of the star-system. But for 5 years, from 2002 to February 2007, he was romantically linked to his compatriot Alanis Morissette. The separation was tough for both of them, but today the two have established a healthy relationship of friendship

From Take That to the Backstreet Boys, what happened to the boybands of the 90s. PHOTOS

Alain Delonthe handsome dark man, the most loved by women, suddenly decided to end the relationship he had with Romy Schneider. It was 1963 and they fell in love in 1959. At the root of their separation, Alain’s betrayal with actress Nathalie Barthélémy

Marcello Mastroianni and Catherine Deneuve is one of the most successful film and life couples ever. At least apparently. Since he will never divorce his wife and she will not part with her beloved Paris

From Aquaman to Mr. Bean, 40 films revisited by the artist Pixelfaker

The love story between the writer Arthur Millere the actress Marilyn Monroe lasted only 5 years, from 1956 to 1961, but it was an intense story, capable of bringing two apparently distant worlds closer together: writing and entertainment

Blonde, the teaser trailer of the film with Ana De Armas in the role of Marilyn Monroe