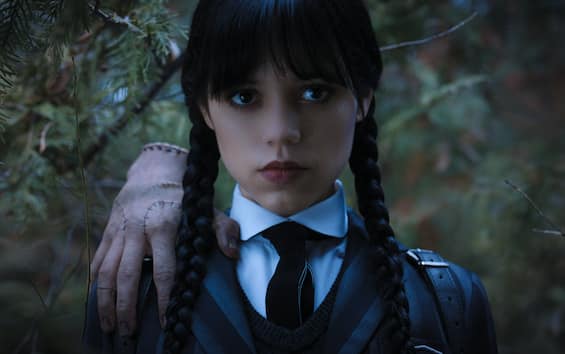 Anyone who has already watched Wednesday, the Netflix television series (also visible on Sky Q and through the app on Now Smart Stick) you will have noticed that there is something particularly strange and disturbing in the staging: the protagonist, Wednesday which in the local version is Wednesday (played by an outstanding Jenna Ortega) never blinks. Never.

According to Netflix’s Twitter account, the fact that the show’s prima donna doesn’t bat an eye (this time an expression we use literally) was not expected.
The “fault” (even if for the spectators it is, if anything, the “merit”) belongs to Tim Burton, the director who shot a good part of this series which is shattering almost every record (the only thing missing to beat Squid Game. He has already routed all the others, Stranger Things 4 included).

It would all start when Ortega rehearsed “a take where he didn’t bat an eyelid”. He, Burton, was “so in love with the result” that he ordered the actress not to blink for the rest of the shoot. The result of this peculiarity is so disturbing and bizarre that it leaves you stunned, as well as totally in love with the interpreter (whose skill in immersing himself in this cult character is truly incredible).

This stylistic choice of never-flapping lids helped make Jenna Ortega’s Wednesday even more alluring.
After the airing of the show, which took place a few days ago, the public was so enthusiastic about Ortega’s performance as Morticia and Gomez’s daughter that they consecrated her to the only real Wednesday Addams (although there are clearly the usual detractors, the haters who is never happy with anything, any day of the week, always to quote Wednesday).

But an almost unanimous chorus is rising online in these hours, calling Ortega “perfect” for the role, as well as “surprising and unforgettable”. The part that seems to have been tailored to the actress is that of the grumpy, bizarre, dark and disturbing student. And not only the public is crazy about it: even the critics praise it.

At the bottom of this article, find the Netflix tweet revealing the origin of Wednesday’s never-flapping eyelids.

Most critics also applaud Jenna Ortega’s work.
Megan Navarro by Bloody Disgusting she writes, “Wednesday may be down-to-earth and forthright in demeanor, but her eyes convey her emotional truth.”
However there are those who complain that this spin-off series de The Addams Family strays a little too far from the source material, stating that it would fail to quite capture the “magic” of the original Addams Family films.

Not only eyelids: dance inspirations also add to the charm

The fact of seeing the protagonist always with a fixed gaze, without the eyelids ever closing, becomes an unnerving lack of a wink that makes the viewer tremble, makes him uncomfortable, as if he were fixed in an insistent and piercing way. Without detracting from the talent (and intuitions) of Jenna Ortega, we recall that even Wednesday played by Christina Ricci often did not blink. However that wasn’t the absolute rule, instead this time we’re talking about an interpreter who will have had to deal with really annoying dry eyes at every take…
But even that annoyance probably helped, as far as the final result is concerned. Chapeau!
But that peculiarity isn’t the only intriguing fact we discovered by taking a peek behind the scenes of the show. Even the inspirations for the already iconic Wednesday school dance helped to characterize the character in a wonderful way.
Jenna Ortega revealed that she drew inspiration from a number of musical artists to prepare for that scene, including “Siouxsie Sioux, Bob Fosse’s Rich Man’s Frug, Lisa Loring, Lene Lovich and Denis Lavant,” as she wrote. on Twitter.
Also among his sources are “archive footage of goths dancing in clubs in the 80s,” he added on Elon Musk’s social network.

We are very likely to see a second season

On Wednesday (!) November 30 the co-showrunner of Wednesday, Alfred Gough, has raised hopes among fans, hinting at ideas for a potential second season. Gough revealed that she hopes to continue to enrich Wednesday’s relationship with her roommate, werewolf Enid Sinclair (Emma Myers), explaining, “I think like any relationship or friendship, it can be complicated by other factors. It will never be smooth sailing”. Alfred Gough’s wish would be to explore Wednesday “learning to navigate the ups and downs of friendship.”

Co-showrunner Miles Millar has also revealed his plans, explaining that he would like to examine the relationship between Wednesday and his mother, Morticia (played by Catherine Zeta-Jones), which he believes is “essential to the show.” He hopes also to investigate the ways in which “Wednesday is trying to forge his own path outside the family.”

The series of records

Although there is nothing official, the chances of a second chapter in the series are very high, as high as the number of views scored by the show directed by Tim Burton (who directed most of the episodes).
Its spin-off dedicated to the Addams’ eldest daughter has broken every record (every record for an English-language series, given that the absolute record for now is still held Squid Game).

The streaming platform has announced that the series of Miles Millar and Alfred Gough has broken all records in englishsurpassing the views achieved a few months ago by the fourth season of Stranger Things.

With 341.23 million hours viewed in its first week, this new eight-episode series takes the beat Stranger Things 4whose seven episodes totaled 335 million hours of play in the first full week it was available on the platform.
This is a historic record for an English-language series (the absolute record – we repeat – is held by Squid Gamand, with 571.8 million hours viewed in its peak-rated week).
According to Netflix, Wednesday debuted in the Top 10 in all 93 countries where the service is available, placing #1 in 83 territories, just like Stranger Things 4. The streaming platform added that the teen horror series has been viewed by more than 50 million “household users”.
These are numbers that usually make a second season 100% sure… Which many are hoping for, totally in love with Jenna Ortega’s interpretation of Wednesday Addams.

Below is Netflix’s tweet revealing the origin of Wednesday’s never-blinking eyelids.