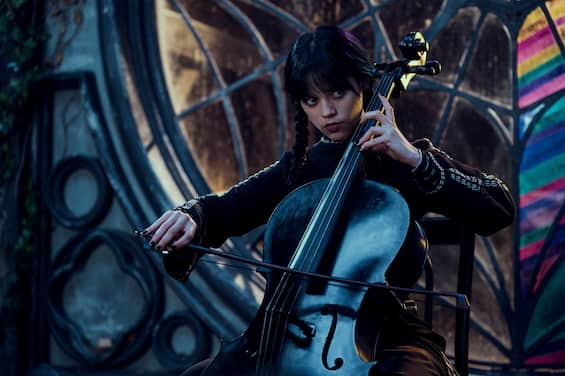 Adolescence can be a nightmare, a kind of horror full of monsters and pitfalls. And living it is a complicated adventure, especially for those who don’t recognize themselves in the pack. WednesdayTim Burton’s first TV series which arrives on Netflix from 23 November (also visible on Sky Q and via the app on the NOW Smart Stick) presents itself as a gothic-tinged teen dramedy in which the coming-of-age element appears as a common thread at least as much as the mystery full of twists and the horror and supernatural component.

Already from the first trailer, the producers of the series put us in front of the background that leads the young Addams to change school to move to Nevermore Academy, a boarding school for young outcasts on the edge of Jericho town, full of werewolves, mermaids, vampires and gorgons. Now, after dumping piranhas in his high school swimming pool to punish bullies, it seems almost automatic that Wednesday is more comfortable in the midst of a group of fantastic creatures, but it is not.

Wednesday, quite simply, appears completely distant from the definition of a social animal. She is loner and misanthropic and would rather spend her time with a cello or in front of a typewriter than taking selfies to post on social media. So it doesn’t take much for the idea of ​​her integration to crumble even at the Nevermore Academy. Outcast among outcasts, Wednesday doesn’t seem to recognize herself in the everyday life of her peers and her fate wants her to end up in a room with a partner who appears as her perfect opposite of her. And it is no coincidence that the character with whom she seems to be more at ease than her is a Hand that does not speak, which in English is called Thing, and with whom an amusing and effective buddy movie dynamic is triggered.

Although the protagonist almost immediately finds herself having to solve a series of murders by digging into her family’s past, the real villain of the series does not seem to have the appearance of a monster. Rather, it is a product of distrust, of the fear of being different, of having to appear at all costs, of homologation to a pre-established canon and of the obligation to respond to expectations predetermined by others. Social and family pressures are the real monster that threatens to break the identities of young teenagers in search of their place in a world that does not understand them and rejects them. The reversal of perspectives is perfectly framed in the portrait of totally dysfunctional families, among which that of the Addams, apparently the most absurd and distorted, appears to be the only one in which parents show at least the will to understand their children’s needs and satisfy them the inclinations.

A TIM BURTON IN GREAT SHAPE

Tim Burton’s hand is evident. In the first four episodes, those directed by the Burbank director, a grotesque but elegant aesthetic dominates, which plays with the contrasts between bright colors and the black and white of Wednesday, between the bright photography of Jericho and the darker tones of the Nevermore Academy , a sort of lively Hogwarts whose students compete to win the prestigious Poe Cup, dedicated to the most famous of the Academy’s students. Burton appears decidedly fit and at ease with a story that seems tailored to his passion for the narrative universe of the Addams Family and the themes dearest to him since the days of Edward scissor hands. Alongside him a Danny Elfman once again masterful in building the perfect soundtrack to dress the story.

To shine in an ensemble and young cast, which leaves the stars Catherine Zeta Jones and Christina Ricci on secondary roles, is an extraordinarily good Jenna Ortega in bringing to the screen for the first time an unedited version of Wednesday, a character who for the first time we see no longer a child and struggling with the transition to adulthood. In a context that invites overacting and masquerade exasperation, Ortega works by subtraction, resulting capable of restoring the emotion and sensitivity of a unique young woman of her kind through silences, fixed and hallucinated gazes, scathing jokes pronounced with monochord tone.

And in the end this is, perhaps, the most interesting thing about Wednesday. Net of any discourse on Burtonian aesthetics and on the more sincere return to the poetics of marginalization by the director of Beetlejuice, what emerges is the courage to paint another Wednesday, to compete with the icon (and the presence of Christina Ricci in the cast is the confirmation of this will) to go further and try to tell a new story without violating the spirit of the original work. Who talks about young people, showing that they know how to listen to them.