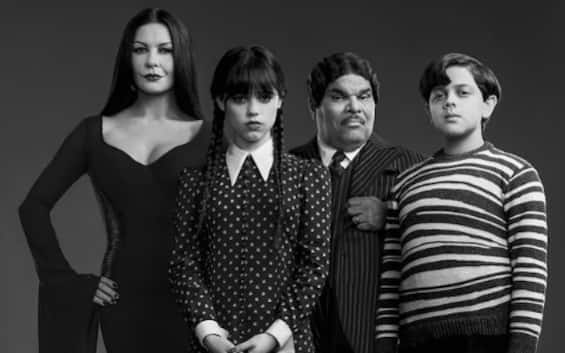 Netflix has released the first official photo of Wednesdaythe series directed by Tim Burton and coming soon. The streaming platform (also visible on Sky Q and via the app on Now Smart Stick) distributed the shot showing together for the first time Jenna Ortega, Catherine Zeta-Jones, Luis Guzmán and Isaac Ordonez.

Great curiosity for the new work signed by one of the most loved directors in the world. In the past few hours, Netflix has given the public the first image of the Addams family.

The black and white shot thus offered a glimpse of the series, obtaining numerous comments and more than 460,000 likes. Starring Jenna Ortega in the role of WednesdayCatherine Zeta-Jones in that of MorticiaLuis Guzmán in that of Gomez and Isaac Ordonez as Pugsley.

In recent days Netflix (also visible on Sky Q and through the app on Now Smart Stick) has also distributed another photo, this time only with Jenna Ortega.