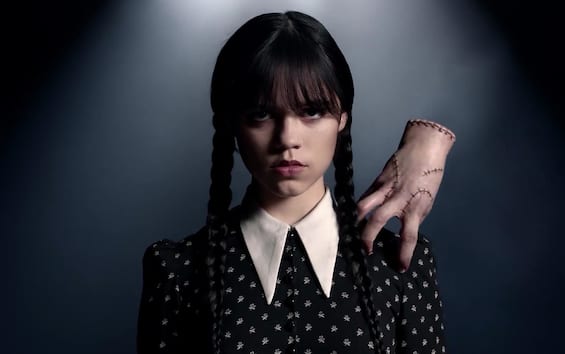 Netflix has published the new featurette by Wednesday, spin-off series of the The Addams family which represents the debut of Tim Burton in the world of seriality. The video posted by the platform explores the director’s work through the comments of the protagonists and some members of the staff and production.

Wednesday, the work of Tim Burton

“Tim Burton and Wednesday Addams are made for each other,” they say Alfred Gough and Miles Millarshowrunners and executive producers, in the video released by Netflix as an advance of Wednesday. A way to tell the art of Tim Burton, for the first time directing a TV series. “Tim is an iconic director – comments the protagonist, Jenna Ortegain the video – as a child I always dreamed Beetlejuice“. “Tim Burton is an incredible director – echoes Gough – he has always been our first choice for the series”. Great esteem also on the part of Coleen Atwood, costume designer of the series. “What makes Tim a great visual director is his incredible sense of color and style.” “As bizarre and creative as he may be – he comments Catherine Zeta Jones, aka Morticia – the characters remain true. This makes them credible in worlds that are sometimes not so credible ”.

Wednesdaywhat do we know about the series

Wednesday is a series of eight episodes dedicated to the daughter of the Addams spouses, of a mystery genre with investigative and supernatural tones. The student studies at Nevermore Academy but we know how unsociable she is: she tries to restrain, with great effort, her paranormal powers, but at the same time also to foil a monstrous series of murders that terrorize the local community and solve the mystery that involved her parents 25 years earlier. To play the protagonist Wednesday Addams will be there Jenna Ortega. The rest of the cast includes Gwendoline Christie (principal Larissa Weems), Jamie McShane (Sheriff Galpin), Percy Hynes White (Xavier Thorpe), Hunter Doohan (Tyler Galpin), Emma Myers (Enid Sinclair), Joy Sunday (Bianca Barclay), Naomi J Ogawa (Yoko Tanaka), Moosa Mostafa (Eugene Ottinger), Georgie Farmer (Ajax Petropolus) and Riki Lindhome (Dr. Valerie Kinbott). Also present Christina Ricci as Marilyn Thornhill: the actress had played Wednesday in the film The Addams family 1991 and its sequel, both directed by Barry Sonnenfeld. To play the other family members in the series will be Catherine Zeta-Jones (Morticia Addams), Luis Guzmán (Gomez Addams), Isaac Ordonez (Pugsley Addams) and Fred Armisen (Uncle Fester). Wednesday will be released on Netflix starting next November 23 and will also be visible on Sky Q and through the app on Now Smart Stick. October 31st Tim Burton will be in Italy at Lucca Comics & Games 2022 on the occasion of the European preview of the first episode of the series.