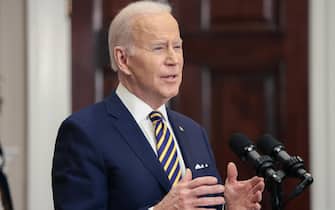 The specter of chemical weapons hovers over the war in Ukraine. Russia accuses the US of helping Kiev prepare them in the laboratory. Against the White House warned of the risk of Moscow using them, naming them to create a pretext to use them. The director of the Central Intelligence Agency William Burns said that “the use of chemical weapons is a serious risk” and could be justified by Moscow through an orchestrated operation. Boris Johnson said he feared Russia would use them, stressing that it is “Putin’s style” to use these methods

WATCH THE VIDEO: Chemical weapons: what they are and how they work

The use of chemical weapons is prohibited under the Chemical Weapons Convention (Cwc) entered into force on April 29, 1997 and implemented by the Organization for the Prohibition of Chemical Weapons (Opcw), a body of which 193 States belong

The target OPCW is to ban “the use, development, production, storage and large-scale transfer of chemical weapons and their precursors”

States that accede to the convention must declare which and how many chemical weapons they possess and proceed with their destruction. The task of the OPCW is also that of to verify through inspections the destruction of weapons

Russia leaves the Council of Europe: what does it mean and what are the consequences

Chemical weapons are meant all weapons used in warfare which use toxic properties of some chemicals to kill, injure or harm the enemy. They are also classified as chemical weapons all devices used to “transport” substances, such as bombs, bullets, mines

Ukrainian war, new sanctions on Russian oligarchs: who are the billionaires close to Putin?

Chemical weapons are divided into based on their action. There are nervin agentsi, which act by inhalation in seconds or contact. They inhibit a nervous system enzyme (acetylcholinesterase) and cause vision problems, headaches, nausea, vomiting, seizures, paralysis and death. Among these are the Tabun, the Sarin, the Soman, the Ciclosarina and the VX

The asphyxiating agents, dispersed as gas, they act immediately and affect the respiratory tract. When inhaled, these agents cause the alveoli, the air sacs in the lungs, to secrete fluid, essentially drowning those affected.

The blister agents they are one of the most common chemical weapons. These are oily substances that act by inhalation and contact, affecting the eyes, respiratory tract and skin, first as an irritant and then as a poison

Exposure causes skin blisters that look like severe burns and often cause blindness e permanent damage to the respiratory system. They are sulfur mustard, nitrogen mustard, lewisite and phosgene oxime

The blood agents they are hydrogen cyanide, cyanogen chloride, arsine. These agents inhibit the cells’ ability to use oxygen, causing suffocation. Blood agents are distributed through the blood and generally enter the body by inhalation

The riot agents, such as tear gas and pepper sprays, are considered chemical weapons when used as a method of warfare. States can legitimately own riot agents and use them for domestic law enforcement purposes, but must declare what type of riot control they possess

According to the Opcw, the Russia completed the destruction of its 40,000 tons of chemical weapons in 2017. The Organization also deals with national defense programs against chemical weapons to intervene in the case of their use