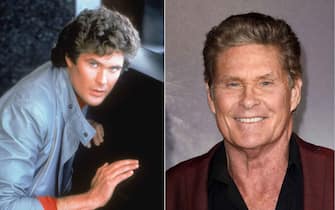 David Hasselhoff – The actor achieved success first thanks to the telefilm Supercar (1982-1986), and later with Baywatch (1989-2000), the most viewed TV series in the world, with about a billion viewers. Among his most important works, there are also several feature films such as Layover – Torbide obsessions and Spongebob – The film. However, Hasselhoff is an all-rounder. He also made his debut as a singer, especially appreciated in Germany, where he has sold millions of copies

Pamela Anderson – The actress began her career as a model of Playboy after being discovered in the summer of 1989 during a football game. Her international success came in 1992 playing CJ Parker in Baywatch. She has since taken part in numerous television shows and is always on the front page of the tabloids and gossip newspapers for her rather chatty and eventful private life. Today you are actively involved in the issue of animal rights. PETA she named her Person of the Year 2016. she has been a convinced vegan for years now

Yesterday and today, how Baywatch star Pamela Anderson has changed

Tom Welling – The actor became famous for playing Clark Kent / Superman on the hugely popular television series for 10 years Smallville, aired between 2001 and 2011. Before becoming an actor, however, she embarked on a modeling career posing for some famous brands such as Tommy Hilfigher, Abercrombie & Fitch and Calvin Klein. Between 2017 and 2018 he is in the cast of the TV series Lucifer

Yesterday and today: how Tom Welling has changed

Kevin Sorbo – The actor, born in 1958, achieved television success thanks to the series Hercules and, during the same period, he had the opportunity to act in the television show signed by Global TV Andromeda, in which he played Captain Dylan Hunt. From the same period was her participation in the film Kull the conqueror, in which he was the protagonist. Subsequently the actor slowly disappeared from the spotlight, his most recent television appearance is in the series Supergirlwhere he played the role of Lar Ghent for three episodes

Kevin Sorbo, here’s what the actor who played Hercules looks like today

Patrick Dempsey – He was one of the most loved and well-known faces of the famous American TV series Grey’s Anatomy, where he played the role of Derek Shepherd, aka Doctor Strangelove, for many seasons. After leaving Grey’s Anatomy in 2015, he starred in many successful films. He recently played the character of Dominic Morgan in the TV series produced by Sky “Devils”

Katie Holmes – The actress is among the most popular and beloved artists in the world. The great media explosion of the actress takes place with the iconic series Dawson’s Creek in which he played the character of Joey Potter. Later, he will get several film roles such as Perfect generation And Shards of April, thanks to which he obtained a nomination for the Satellite Awards. Other important roles will be scored by Christopher Nolan with Batman Begins and later in 2011 thanks to the TV miniseries The Kennedys. She was married to Tom Cruise from whom she divorced in 2012

Katie Holmes, here’s how she changed

Chuck Norris – The character that made him famous practically all over the world is that of Cordell Walker in the television series, which went on from 1993 to 2001, Walker Texas Ranger. Norris most recently played a retired sergeant major in the final episode of Hawaii Five-0

Chuck Norris, the most famous phrases of the actor

Jennie Garth – The American actress played the blonde Kelly Taylor of Beverly Hills 90210. After this role, she also had other blockbusters that never surpassed what made her famous

Beverly Hills 90120, 30 years ago the first episode: the posts of the actors

Matt LeBlanc – The actor achieved success with the character of Joey Tribbiani in Friends. In 2004, 6 months after Friends ended, he became the star of the spin-off Joey. He returns in front of the camera in 2011 in Episodes (2011-’17), also winning a Golden Globe for his performance. Hence the professional rebirth and involvement in new television programs, such as Top Gear (2016-’19) and the Man with a Plan series (Full-time dad) unfortunately canceled due to the Covid 19 pandemic.

Friends, the protagonists: how they have changed

James Van der Beek – How to forget the sweet protagonist of the Dawson’s Creek series? James, on the Dawson Leery series, played this role for all 6 seasons of the most popular teen drama of the late 1990s. After the end of Dawson’s Creek he appeared in a few episodes of other series such as How I Met Your Mother and Ugly Betty

David Duchovny – The American actor became famous for playing writer Hank Moody on the series Californicationand Detective Fox Mulder in the television series X-Files. Thanks to his iconic portrayal of the detective, David also played the same role in the new season of X-Files released in 2016

Tom Selleck – On December 11, 1980, CBS launched in the US Magnum PI, a television series set on the beautiful islands of Hawaii. At the center of the narration is the activity of the private investigator, played by Tom Selleck who lives in a luxurious villa driving a splendid Ferrari 308 GTS. Selleck had a long career in film where he starred in some comedies such as Three bachelors and a baby And In & Out. He is currently the protagonist of the detective series Blue Bloods where he plays Frank Reagan, Commander of the New York Police Department

Erik Estrada – The actor played motorcycle policeman Frank Poncherello, for Ponch friends, in the American television series CHiPs, aired in Italy in the 1980s. At his side, on the streets of California, his colleague Jon Baker. In 2011 he participated in Dancing with the Stars, the American version of Dancing with the Stars. Thanks to his reputation as a good cop, the actor has made numerous appearances in support of the safety of children in cars

The real names of the most famous actors in the world: PHOTOS

Richard Dean Anderson – A Swiss army knife and little more was enough to save the world. MacGyver was one of the most followed series of the eighties and nineties. The protagonist was Richard Dean Anderson, an American actor with small parts in TV series such as “General Hospital”. Richard Dean Anderson’s last appearance on TV was in 2013, in an episode of the series Don’t Trust the Bitch Inside 23

Just the word, the most famous phrases from movies

Joan Collins – The actress in the 80s played the wicked Alexis Colby in the famous TV series Dynasty. Thanks to the role of the vengeful ex-wife of the tycoon Blake Carrington, she became one of the most awarded and paid divas in the world. Today, despite her not very young age, she is still an active and charming actress. In recent years she has appeared frequently in several American TV series

A mother as a friend, 20 years later: the unforgettable moments

Tori Spelling – The actress, born in 1973, is one of the most famous artists in the world. The actress was an icon of the 90s thanks to the role of Donna Martin in the series “Beverly Hills 90210”. Over the years the actress has also dedicated herself to cinema and book writing. Tori she is married to actor Dean McDermott with whom she has five children.

Tori Spelling, yesterday’s and today’s photos of the actress

Gillian Anderson – The actress achieved success with X-Files TV series in which she played Dana Scully. In recent years she has dedicated herself to the battles for gender equality and together with the writer-activist Jennifer Nadel she has created a book, indeed a Manifesto dedicated to women and self-acceptance

Nineties: 5 unmissable films for all palates

Kyle MacLachlan – The actor’s career is inevitably associated with the cult series Twin Peaks created by David Lynch and Mark Frost. With the role of agent Dale Cooper he also won a Golden Globe, but his successes did not end with this work. He has taken part in many other films: from the commercial film The Flintstones to various roles in TV series such as Sex and the City And How I met yout mother. Before Twin Peaks he had made two cult films such as Dunes And Blue Velvet always with David Lynch

The best films about Area 51, between aliens and secrets

Fran Drescher – The actress, born Francine Joy Drescher, is one of the most famous American actresses. Her name is best known for the character of Francesca Cacace, the protagonist of the cult television series The Nanny. The sitcom was officially presented last February Indebtedwhich sees her play the protagonist’s mother.

The Nanny, Fran Drescher turns 63: this is how the actress is today