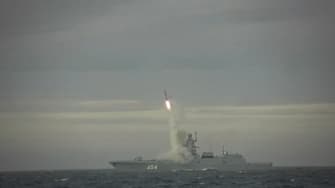 The armed forces of Moscow have announced that they have successfully retested the missile cruise Hypersonic Zircon, also known as 3M-22 Tsirkon. Designed to destroy the largest naval and land units – aircraft carriers, cruisers and destroyers – it is considered to be one of the deadliest weapons in Russian made (in the photo, the test in an image released by the Russian Defense Ministry)

WATCH THE VIDEO: London: “Arms to Moldova to protect themselves from Russia”

The missile was launched from the frigate Admiral Gorchkov from the Barents Sea to the White Sea, both in the Arctic Ocean. It can travel at a speed close to Mach 9 (about 11 thousand kilometers per hour), at altitudes between 30 and 40 km, where the air is thinner and the friction less (in the photo, the Gorchkov frigate in Cuba, 2019)

The first testing of the Zircon dates back to 2020. The Russian president Vladimir Putinin presenting the missile, he defined the test as “a big event in the history of the country ”

Putin defined “invincible”Hypersonic missiles, because they are difficult to intercept thanks to their very high speed

Zelensky: “Arms in Kiev as an investment for stability in the world”

These are weapons potentially capable of carrying nuclear warheadsboth in the cruising version – lo Zircon – than in ballistics, the Kinzhal (pictured, MIG-31 planes carrying Kinzhal missiles)

The latest test with Zircon, as announced by the Moscow Defense Ministry – he writes Reuters – covered a distance of approx a thousand kilometers (in the photo, an archive image of a Zircon missile)

There speed of hypersonic missiles can be about nine or ten times that of sound (in the photo, the launch of a Russian Zircon in February 2022)

Another test was carried out on October 4, 2021, when a Zircon was thrown by a submarine K-560 Yasen-class Severodvinsk

Serial production of the Zircons began in November 2021