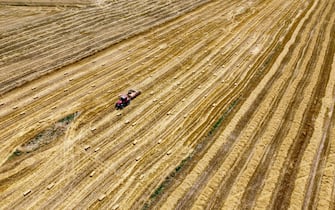 There wheat crisis Ukrainian remains at the center of diplomatic talks with the Turkey who keeps looking for one mediation between Moscow and Kiev. Turkish President Erdogan – after the failure of the meeting in Istanbul between Moscow Foreign Minister Lavrov and his Turkish namesake Cavusoglu – is ready to hear from both Russian President Vladimir this week Putin than the Ukrainian Volodymyr Zelensky

WATCH THE VIDEO: Ukraine, EU works on wheat and focuses on the “Romania card”

“There is an ongoing war between Ukraine and Russia and we know that agricultural products come to a large extent from these countries,” said Erdogan, stressing that “the negotiations are underway“and that we will discuss” what steps can be taken ”

Meanwhile, Kiev has moved for unlock export of its cereals, with the opening of two corridors by landone towards the Poland and the other towards the Romaniaand trying to activate a third with i Baltic countries

The Ukrainian Deputy Foreign Minister, Dmytro Senikreiterated that global food security is “at risk” because the Russian invasion of Ukraine stopped Ukrainian grain exports from the Black Sea

The climate between Russia and Ukraine also remains very tense on the wheat issue, especially after Ukrainian agriculture minister Taras Vysotskyi accused Moscow of having destroyed up to 300 thousand tons of wheatstored at the Ukrainian port of Mykolaiv on the Black Sea

The transport of grain by land is however the road on which it is also working Brussels, waiting for the talks between Moscow and Kiev to unlock the ports. The card on which the European Union is betting is that of Romania. The goods would pass through the region of Danube Delta – on the border with the district of Odessa – and would then leave Ukraine through i navigable canals (in the photo, trucks carrying grain the border between Ukraine and Moldova)

Ukraine, 8.1 billion at the table for Italian families

The negative outcomes of the negotiations so far, said the vice president of the EU Commission Valdis DombrovskisI am responsibility of Moscow. “It is up to Russia to stop the ongoing aggression and the blocking of exports”, said Dombrovskis, who added how “in the meantime we will do everything possible to find alternative routes through terrestrial corridors”

The Romanian option was also raised by the President of the European Commission Ursula von der Leyen during last week’s lightning visit to Kiev, in view of the green light that the commission is preparing to give Ukraine’s candidate status

This too is not a question without unknowns. Von der Leyen aims to bring together the 27 member countries around the yes for Ukraine’s entry into the EU but they are at least you are the states that remain skeptical or undecided: Denmark, Sweden, Finland, Portugal, Germany and Austria

“My hope is that, between twenty yearswe will be able to say that we have made the right decision “, underlined the president of the commission. Zelenskyonce again, he instead reiterated the importance of such a gesture by the EU: “Keeping us out of the EU goes against Europe itself”