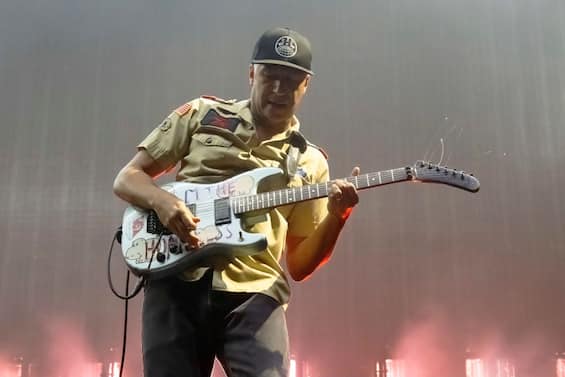 At least it is funny to think that in a band called Bored of Education (literally “bored with education”) a future Nobel laureate could join forces, destined to devote a good part of his life to academic education. Before devoting himself to click chemistry and bioorthogonal chemistry, Carolyn Bertozzi but she was just a Harvard student without too clear ideas, who was killing time playing basketball and playing with a future rock star: Tom Morello.

Playin ‘in the name of

Harvard is one of the most important universities in the world. Here many men were formed who changed history and who were very often also great scientists, just think of the physicists Robert Oppenheimer and Philip W. Anderson. However, the university has also hosted various artists in its prestigious classrooms, from movie stars like Natalie Portman to true rock legends like Tom Morello. In such a large and heterogeneous campus it is not so difficult that different sensitivities can meet and that a guitar virtuoso can cross his path with a future Nobel Prize in chemistry.

In the early eighties, Tom Morello was a student of political science already very attentive to the social and with a devouring passion for music. When he wasn’t busy with his studies, strumming the guitar was for him a way of “loving each other intellectually”.

Obviously playing alone and without an audience did not fully satisfy Morello who slowly began to form his first bands. One of these was Bored of Education, a line-up that mainly played covers of the hits of those years.

When the group found themselves looking for a new keyboard player to introduce themselves, immediately resulting perfect for the role, it was a very young Carolyn Bertozzi. Like most of her peers, the future scientist at the time did not have a clear path to take. She loved sports very much, she considered basketball a “meditative” pastime and she had cherished the dream of becoming a footballer when this ambition was still very little mainstream among girls. Once she arrived at Harvard, she seemed to have convinced herself that her tomorrow could be in the world of science but she was not sure which field to choose: at first she had focused on medicine, only to navigate between biology and chemistry.

To let off steam and put aside her doubts, the not yet professor Bertozzi had two antidotes at the time: basketball and music, two hobbies where it was essential to focus more on rhythm than on oneself.

In an article published some time before receiving the Nobel Prize, Carolyn Bertozzi had hinted at the two years she spent playing alongside the future member of Audioslave and Rage Against The Machine: “We performed at college parties and fraternity parties in other university in the Boston area, ”recalled Bertozzi, speaking of those concerts as his first true“ moments of glory ”. Maybe she was exaggerating a bit but, from what the chronicles of those years report, Bored of Education really seemed to have a solid reputation in the area, so much so that they won the Ivy League Battle of the Bands in the 1986 edition.

Thirty-six years have passed. Today Professor Bertozzi is an acclaimed world-famous scholar while her youthful companion has become a reference for anyone who approaches a guitar. She assembles molecules in an unprecedented way (the so-called click chemestry), he continues to line up musical fragments in ever new ways. Despite having taken radically different paths, Tom Morello and Carolyn Bertozzi have never stopped loving each other. When the former keyboardist of Bored of Education was honored in Sweden, the old friend was among the first to congratulate her, recalling the good times in a tweet: “Congratulations to my former Harvard bandmate on her award. Nobel Prize in Chemistry! We won the Ivy League Battle of the Bands in 1986 with our rock band Bored of Education, with her on keyboards and me in spandex. ” A message to which Bertozzi immediately responded with enthusiasm and a pinch of nostalgia: “Thanks Tom! Maybe someday we can reunite the band. Ve-Ri-Loud “. Who knows maybe one day there will really be room for a reunion or even a single together. While waiting for her, Professor Bertozzi is still in training, playing on the piano practically anything when academic commitments leave her free. Too bad that the name My Chemical Romance in the meantime has already been taken by another group, it would have been perfect for a new band with the protagonists of this story.