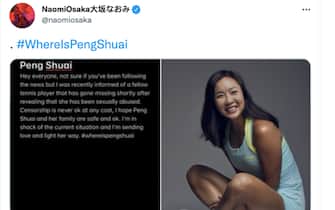 Not only tennis colleagues and colleagues, champions of other sports these days are also throwing appeals on social media to ask for the truth about Peng Shuai’s case. The 35-year-old tennis player accused former Deputy Prime Minister Zhang Gaoli of sexual violence in early November with a post on Weibo, a Chinese social network. Since then there has been no news of her. “I am shocked by the current situation. Censorship never goes well, at no cost, I hope Peng Shuai and his family are safe and well”, writes tennis player Naomi Osaka

“I am devastated and shocked to hear the news of Peng Shuai, I hope she is safe and found as soon as possible. All of this needs to be investigated and we must not be silent. I am close to her and her family in this incredibly difficult time. “, And Serena Williams’ tweet

“Where’s Peng Shuai?” He also asks the Wta, the women’s tennis world federation with a post that was retweeted by the Italian Sara Errani

“The disappearance of Peng Shuai is not just a WTA problem. We are all concerned,” he writes the French tennis player Nicolas Mahut

Tennis, all the news of Sky TG24

The tweet of the Swiss tennis player Stanislas Wawrinka

The tweet of the former Polish tennis player Aga Radwanska

The tweet of the Spanish tennis player Feliciano Lopez

“We want to know, we need to know”, reads the tweet of the former American tennis player Patrick McEnroe, John’s brother

Not through social media, but from Turin, where the ATP Finals is playing, he also talked about Peng Shuai Novak Djokovic, the number 1 tennis player in the world: “Honestly, it’s shocking that he is missing, especially since he’s someone I’ve seen on the tour in previous years several times. There’s not much more to say but hope she’s found, that she’s fine . It’s just terrible. I can imagine how his family feels. ”