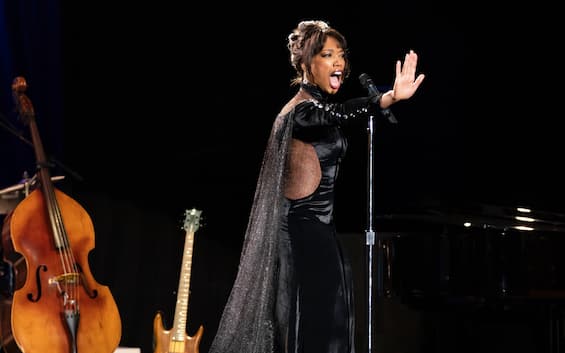 The scene takes place backstage at The Bodyguard, the romantic action film that marked the debut of just thirty years ago Whitney Houston as an actress. We see Naomi Ackie as the singer while arguing with Stanley Tucci, here alter-ego of the legendary record company Clive Davis. Davis plays Houston a song by Dolly Parton, I Will Always Love You. The electrocution is immediate, her success was born at that moment which will be a cornerstone of the pop star’s repertoire for the rest of her career. The hit is now counted as one of the reasons for the exploit of the film and many don’t even know yet that it was a cover, so much do they associate it with Houston. The epiphany we are witnessing in this minute and ten is the heart of the last clip that anticipates Whitney – A voice in the silencethe biopic on the pop star that will arrive in theaters from December 22nd.

In the video, handing her the walkman with the tape by I Will Always Love YouDavis tells Houston, “Kevin, your new best friend, found this.” The reference is to the co-star of Bodyguard Kevin Costner who fought to have Whitney Houston by his side. The actor was convinced that the film debut pop star was the ideal choice to play such a role, which had originally been conceived by Lawrance Kasdan for Diana Ross. However, Costner was forced to put great pressure, not only on the production but also on the singer herself to realize his plans. Nobody was too convinced of the operation, neither Houston nor the financiers of the film. On the day of her funeral, February 18, 2012, it will be the man who “danced with the wolves” who will tell how much he imposed himself to have that extraordinary artist by his side: “At the height of his success as a singer, I offered her the co-starring role for The Bodyguard. She answered me, fearful, that she wanted to think about it. It would be her first role as an actress. They recommended me to other more experienced ones. And white. They breathed a sigh of relief when she told us that she would be traveling a lot to tour her and she couldn’t accept. Less happy instead when I replied that we would have waited a year to have it”. In the end she paid for her stubbornness, giving a cult to the cinema and an unforgettable soundtrack to the world of music.

A success that became all his own

The cornerstone of that soundtrack to which Whitney Houston gave at least a couple of gems was precisely I Will Always Love You. A song that sounded very different in its first version, recorded in June 1974. It was a country song with a rather sparse arrangement, in which Dolly Parton’s voice soared between guitars and banjos. It was however a great success at the time, so much so that even Elvis was interested in it. It was then revived in 1982, when a new version sung by Parton was inserted (ironically) right in the soundtrack of a film: The most beautiful casino in Texas. In short, it was already a great song but Whitney Houston’s heartfelt interpretation was able to erase the memory of any previous reinterpretation, even in Dolly Parton herself. The country legend would later recall: “One day while I was driving my car I turned on the radio and heard Whitney’s a capella attack. It took me a few seconds to realize what piece it was. I thought ‘And yet she is so familiar to me’ ”. However, the singer appreciated Houston’s cover, not only because she guaranteed her a decent income in terms of royalties. Whitney had, on the other hand, made that song her own, turning Parton’s dedication to her mentor Porter Wagoner into a romantic, powerful r&b ballad that was more than just a cover. The public understood it too, which made it an instant worldwide hit capable of shattering any record. Thanks to that piece Whitney Houston became the first female artist to sell more than sixteen thousand copies but insecurity, that fear of not being up to par which Costner also mentioned in his farewell speech to the singer, did not abandon her even then he was on the cusp of success. Maybe it was that same cursed conviction of never being enough that made her leave too soon. When in doubt, however, we can say that we will always love him, even now that he is just a memory that resonates in our hearts (and in our playlists). To use the words of that immortal song: Whitney, we will always love you.