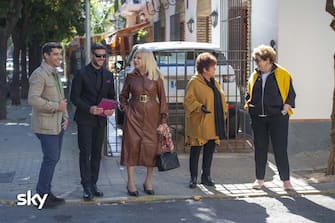 Alessandro Livi is one of the faces of the cast of Quelle brave donne, the on the road show starring the unprecedented trio composed of Mara Maionchi, Orietta Berti and Sandra Milo, traveling to Spain in a fuchsia leopard-print van. In the photo in a suit and dark glasses alongside Sandro Milo

“Those Brave Girls”, the photos of the fourth episode in the Tabernas desert

It is he who drives the iconic van, who has become famous in the format as the “handyman driver” of the three Italian queens of the show.

“Those Brave Girls”, the photos of the third episode in Seville

Alessandro Livi is Italian-Spanish and it is he who guides and accompanies the ladies on the tour along the Iberian Peninsula, quickly winning their affection and the hearts of the public.

“Those Brave Girls”, the first episode is in Madrid. PHOTO

Episode after episode Alessandro shows himself to be likeable and reliable, a handsome young man who, according to an amused comment by Orietta Berti, would have “bewitched” even Sandra Milo.

Passionate about fitness, in the photo taken from Instagram, Alessandro is posing in the shadow of the Madonnina in Piazza Duomo in Milan

Not just a driver, Alessandro Livi since the first episode has been a confidant for the girls, a person to whom they can tell life experiences.

“Those Brave Girls”, the photos of the second episode

On Instagram Alessandro Livi is a real star and has a following of hundreds of thousands of followers.

Always kind and immune to the “reproaches” of Mara Maionchi, Alessandro is the driver everyone would like to have. A true guardian angel

Always elegant, Alessandro Livi proved to be the perfect companion with culinary skills. Qualities highly appreciated by the fantastic trio