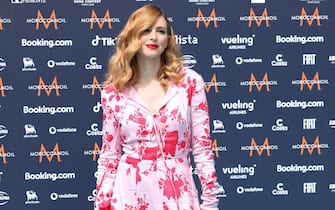 For Carolina Di Domenico this is not a debut at the Eurovision Song Contest, since already in 2018 she was among the hosts of the event

WATCH THE VIDEO: Eurovision 2022: everything you need to know

During the current edition, in addition to supporting Gabriele Corsi and Cristiano Malgioglio, he will moderate the press conferences with Mario Acampa and Laura Carusino

WATCH THE VIDEO: Eurovision 2022: who are the 5 singers already in the final

In 2019, Carolina Di Domenico was among the protagonists of the 65th edition of the Taormina Film Festival, to which the actress Carolina Crescentini was also invited

He has two children with Pierluigi Ferrantinileader of the Velvet. The couple then officially married on July 10, 2021

Eurovision, the best looks and moments of the first semifinal. PHOTO

In close contact with music on a daily basis, between private and working life, she was also among the jury of the Sanremo Festival, as well as conducting the AfterFestival in 2018 together with Edoardo Leo

Eurovision 2022, the finalists after the first semifinal

Staying on the subject of music, he led The Voice of Italy in 2013 together with Fabio Troiano

Eurovision 2022, Chills by Mahmood and Blanco is the most listened to song on Spotify

Eurovision 2022, forecasts on the winner according to bookmakers

Among her works on TV, Carolina Di Domenico was also part of the cast of the eighth season of A doctor in the family. In the plot, she has a brief liason with Giorgio Marchesi