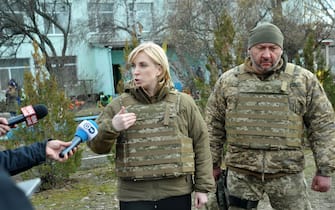 Among the members of the Kiev government who most appear on video after the Russian invasion is Iryna Vereshchuk, Deputy Prime Minister and Minister for the reintegration of temporarily occupied Ukrainian territories: is considered among the symbolic faces of the Ukrainian resistance (photo as of February 2022)

WATCH THE VIDEO: Ukraine-Russia War, the map of the attacks

In addition to the reports on the humanitarian corridors, in his videos and on his Instagram page he takes stock of the victims of the conflict, the situation in the various besieged cities, the difficult situations of civilians. They are not missing attacks on Russian President Vladimir Putinappeals to NATO for the no fly zone, messages of support to President Zelensky (photo as of February 2022)

He studied at the Military Institute of the Lviv Polytechnic, specializing in “International Information”. Then she studied Law at the Ivan Franko National University of Lviv and later specialized in “Public administration“At the Lviv Regional Institute of the National Academy for State Administrators (photo from August 2020)

After graduating from the Military Institute, the government page reads, he lent service for 5 years as an officer of the Ukrainian Armed Forces (photo of February 2022)

Ukraine, what is the no fly zone and why it has not yet been imposed

Between 2007 and 2008 she was a lawyer at the Rava-Ruska City Council. In 2010 she was Vice President of the Zhovkva Regional Administration. Then for 5 years, until 2015, she was at the helm of Rava-Ruskaher hometown of about 9,000 inhabitants: according to Ukrainian media, she was the youngest female mayor in the country at the time (photo from October 2020)

War in Ukraine, the story of Sky TG24. VIDEO

Since 2019 he is a member of the Verchovna Radathe Parliament of Ukraine, for the same party as Zelensky (photo from November 2021)

To the Parliament she was a member of the National Security, Defense and Intelligence Commission and chaired the State Security and Defense Subcommittee (photo October 2020)

In the local elections of 2020 ran with Servant of the People for the office of mayor of Kiev, arriving fifth (photo of August 2020)