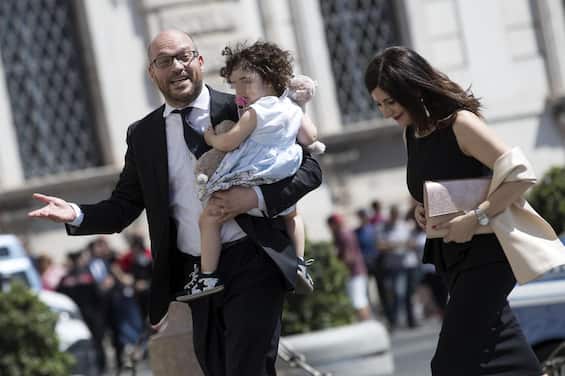 Little is known of the leader of the European Parliament, united in double marriages (with the Roman and Tridentine rites) with the Northern League politician, now the third position in the state. However, her passion for Napoli and sharing the same battles as her husband is known about her

Reserved, jealous of her privacy and a very Napoli fan, unlike her husband who supports Hellas Verona. You know very little about Emilia Romano, wife of the new president of the Chamber Lorenzo Fontana (WHO IS). Her real surname is Romano and not Caputo as has been circulating in recent days, in order to protect the couple’s need for confidentiality. To bring it back to the headlines is the comment on Facebook by the journalist de Daily fact Elisabetta Ambrosi, who wrote: “Whoever couples with such characters is conniving at the very least. Maybe she is poor and she can’t be separated blah blah. The disdain remains ”. A post that triggered a wave of negative comments and forced its author to delete it (TOWARDS THE NEW GOVERNMENT: THE SPECIAL – UPDATES).

What is known about Emilia Romano

Emilia Romano, from what little is known, was born in Naples a few years before Fontana and graduated in law. She is a director of the European Parliament, where she started as an assistant to the former socialist deputy Lia Sartori, then moved to Forza Italia, she met her future husband in Brussels and still lives there with her daughter Angelica. Fontana, in fact, shuttles between Verona, Rome and the capital of Belgium, as soon as political commitments allow.

The wedding with Lorenzo Fontana

As reported by the Corriere della Sera, it is said that the wife of the current president of the Chamber of Deputies shares his political battles as well as his vision of the world, as evidenced by their wedding, which took place with a double Roman and Tridentine rite, an ancient function in Latin that takes place according to the tradition established at the Council of Trent in 1570 and in force until the Second Vatican Council in the 1960s. They were celebrated by Fr Wilmar Pavesi, an ultra-conservative priest very close to Catholic traditionalists and often cited as Fontana’s “spiritual adviser”, who later moved from Verona to Rome. Obviously present at the wedding also Flavio Tosi and Matteo Salvini, the two “godparents” of Fontana’s political career. There was only one public moment in which Romano and Fontana were seen together: it was June 1, 2018, the day of the oath of the Conte I government in which the Northern League politician held the role of Minister for the Family and Disability.