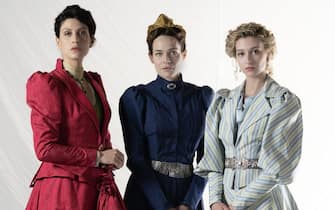 Giulia Bevilacqua is the protagonist of the fiction Stronger than fate directed by Alexis Sweet. Together with her also Laura Chiatti and Dharma Mangia Woods

Stronger than fate, the cast of the fiction with Giulia Bevilacqua and Laura Chiatti

Giulia Bevilacqua graduated in 1997 from the Dante Alighieri state high school in Rome. In 2000 she attended an acting course at the Teatro Training Studio, with Luciano Curreli, and then graduated, after a three-year course, at the National Film School.

Cops – A gang of policemen, the cast: Giulia Bevilacqua is Maria Crocifissa

In the early years of his career he shot some video clips, including one with Bon Jovi and with Federico Zampaglione of Tiromancino

In 2003 he made his television debut in the TV series A doctor in the family 3. Later she starred in other Rai Uno fiction: the series Don Matteo 4 and TV miniseries Don Boscodirected by Lodovico Gasparini, Murder herdirected by Riccardo Milani, ed A family in yellowdirected by Alberto Simone

After debuting in the theater in 2004 with the show The reasons for the defeatdirected by Pierpaolo Sepe, in 2007 she first appeared on cinema screens as a co-star of the film Cardiofitnessdirected by Fabio Tagliavia

In 2007 he also co-starred in the film Rush hour, directed by Vincenzo Marra. In 2009 she is on the big screen with Feisbum! The filmeight-episode film inspired by the social network Facebook

In 2010 he participated in theAle and Franz Sketch Show. During the same period you shot the film How to find the wrong man righttogether with Francesca Inaudi and Enrico Silvestrin, with whom she has already acted in Police District

In 2014 it is one of the new entries of Star Player 2fiction with Luciana Littizzetto, Neri Marcorè and Fausto Maria Sciarappa

As for private life, Giulia Bevilacqua is married to the journalist Nicola New Year with whom she had two children: a girl, named Vittoria and a boy, named Edoardo