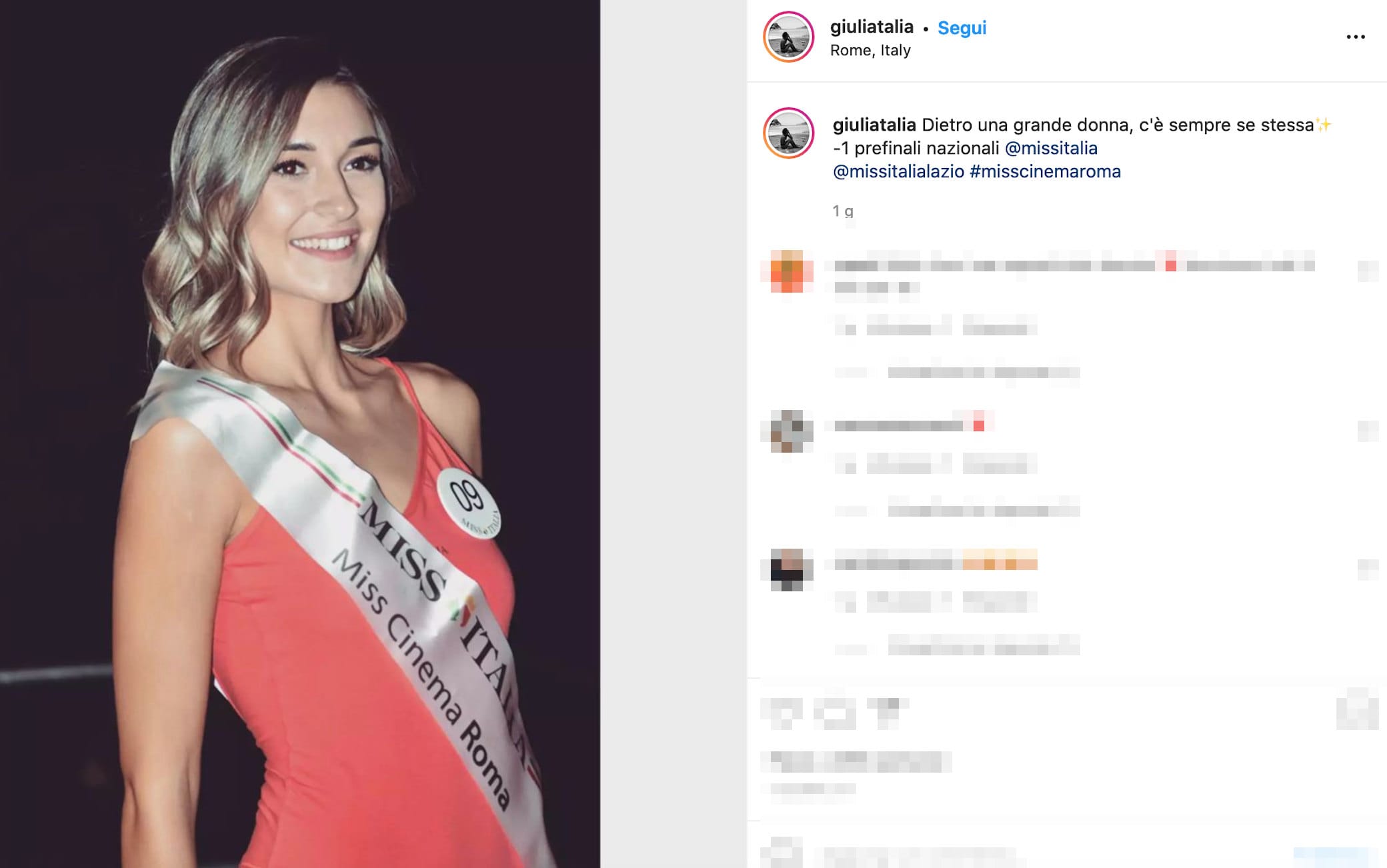 Giulia Talia is the first Miss Italia contestant to be openly homosexual.

It took 75 years to announce this news, which leaves us speechless but still offers us a new look – full of hope – on the future.

The famous beauty contest whose first edition is dated 1946 had to wait so long to have an openly gay woman among its aspiring queens: 75 years old, which becomes 82 if you take into consideration the foundation date of 1939. .

Better late than never: finally a 24-year-old girl, Giulia Talia, arrives to revolutionize the competition, to modernize things and change the cards on the table.

Giulia Talia was crowned Miss Cinema Roma 2020 and is now competing for the crown and scepter of the most famous beauty contest in the peninsula.

“I have been living with Barbara for three years, I introduced her to my parents. I’m not afraid of possible attacks, I can’t wait”, she told the Corriere della Sera during a recent interview.

We wish her not to receive the social attacks that unfortunately Erika Mattina, the finalist of Miss World Italy who was disgustingly threatened because of her sexual orientation, has had to face. “I expect more or less the same things. Some insults were written by people who could have been his mother. I don’t think they would be happy if they said the same things to their daughters”, added Giulia Talia, who says she is ready to face anything. in order to help raise public awareness and, even before opinion, the heart: is it possible that in 2021, almost 2022, these things are still being discussed?

“I want to shine a light on this issue,” added Miss Cinema Roma 2020, proclaiming herself as a voice that will fight for the rights of the LGTB + community and that will finally pave the way for many people after her.

Giulia Talia is from Rome, has not yet a quarter of a century (24 years old) and has entered the pre-finals of Miss Italy by right, after being crowned Miss Cinema Roma 2020.

The promise to the grandmother, who disappeared due to Covid

To the Courier service she told herself, revealing that she never had a secret dream to participate in Miss Italy.
The turning point was the victory of Miriam Leone and the words that her grandmother Sandra said to her at that moment, when she was only 10 years old.

“My grandmother said: one day you will go there too”, explains Giulia Talia with great emotion. The rumor was probably broken when she told the interviewer that her grandmother disappeared due to Covid a few months ago and she, the granddaughter, now wants to keep that promise.

The fate of this girl in the beauty pageant will be revealed on November 30, the date on which we will know whether or not Giulia has entered the shortlist of the 20 finalists of the main competition.

In addition to the main competition, this year there will also be the one for Miss Italia Social, with 10 finalist contestants who will compete for this 2.0 coronation.

Giulia Talia said she realized what her sexual orientation was when she was at university.
Speaking of his partner, with whom he has lived for almost three years, he said: “We met in a club with friends, a month later we were in Santorini for a weekend and seven months later we lived together”.

Although he focused on what his orientation was in his mature age, ie in the university years, he revealed in an interview with Courier service what those who belong to the LGTB + community often claim.

“I think I have always had this awareness, but it was relegated to a corner. I was engaged for a long time with Andrea, who met my parents. Then in the first year of university I realized that the looks of the girls excited me like those. of males, if not more. And then I let myself go “.

A person of a thousand talents

Giulia Talia graduated in scenography from the Academy of Fine Arts in Rome and has recently completed a Master in Interior design.

He is doing an internship in an architectural firm in his city and even works in a pub in the evenings. An intense life, fully lived by a person who proves to have a thousand talents, as well as an undeniable beauty.
A woman who has always been very busy and who does not like to sit idle, as her diary full of appointments, deadlines and tasks reveals.

While now she is able to speak serenely about sexuality, for Giulia Talia it has not always been so easy to do so, quite the contrary. Before coming out he feared the judgment of others.

“I was afraid of being judged. Then I realized that we are all different and that there will always be someone for whom you are not good. You might as well live your life as you want. At one point I wanted to introduce Barbara to my parents. My sister Chiara, four years younger than me, was the first to whom I confessed. My mother told me that she already knew. “

Together with his partner he is talking about marriage, discussing future projects including that of having children.

“We fantasize about marriage: I’d like to celebrate it in a villa, she by the sea. We’ll see. We’d like to have children, how we’ll think about when the time comes,” he told the Courier service.