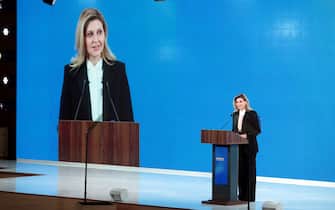 In an interview with Vogue a few months after her husband’s victory in the presidential elections, Ukrainian first lady Olena Zelenska said that she supported him, but that she was not “too happy” to find out what his plans were in relation to politics. “I realized how everything would change, what difficulties we would encounter,” she explained. Today those difficulties include living in a Country at warbeing married to a man who – according to her – is “the number 1 target of the Russians” and being considered a target in turn

WATCH THE VIDEO: Zelensky: Russians have orders to erase our history

Born in 1978, Olena Zelenska is originally from Kryvyi Rih, where her husband Volodymyr Zelensky was also born. The two began dating during university, when she was studying architecture and he was reading. After eight years, they moved on

Ukraine: who is Volodymyr Zelensky, the former comedian who became president. PHOTO HISTORY

It was 2003. The following year their first daughter was born followed by Cyril in 2013. Now the two boys would be in a secret location together with the first lady

Despite her studies, the woman chose to become one screenwriter and continued to work even after the election of her husband. “I write as before,” he said in the Vogue interview, “but now I have to divide my time between the president’s office and ‘Quarter’ (the production house). First lady status is purely representative, you don’t come paid so you can combine two jobs, “he explained

Olena Zelenska has said on several occasions that she doesn’t like being the center of attention, but that she uses the visibility of her role to draw people’s attention to important social issues. Among other things, she has chosen to focus on children’s health, starting with nutritionand on equal opportunities: “I am not a politician and I have no right to interfere with the president’s work, but I can and want to become an intermediary between the people and the authorities”

Precisely as part of its commitment to equality, it has spent itself in the removal of architectural barriers. H.a participated in an event organized on the occasion of Ukraine’s accession to the Biarritz Partenership for Gender Equality calling it “an important step for Ukraine in achieving equality in the broadest sense, regardless of age, culture and physical and mental differences”

While still attending public events, Zelenska had also chosen to use her outfits to give visibility to Ukrainian designers. “I’m happy when they ask me who designed the dress I’m wearing, and they do. It wouldn’t be equally exciting to answer with the name of a famous Western brand”

His life today is very different from what it was then. Nonetheless, she chose to stay in the country, as her husband confirmed in a recent speech, and she seems to have given herself a new task: encourage the population through social networks

“My dear people! Ukrainians! I look at you all today,” he recently wrote in a post on Instagram – where it has around 2 million followers – which features a Ukrainian flag. “You know what? You are amazing! I am proud to live with you in the same country! Many people are said to be a crowd. It is not about us. Because many Ukrainians are not a crowd, this is an army! And today I will not panic and tears. I will be calm and confident. My children look at me. I will be next to them. And next to my husband. I love Ukraine! ”

In yet another he wrote: “This is what Ukraine looks like right now. Here is a video the world can see: we are at war. Due to Putin’s attack, Ukrainians have to take their children to bunkers every night. and fight the enemy under the walls of their homes. Ukraine is a peaceful country. We are against war and we did not attack first. But we will not give up. Whole world, look: let’s fight for peace in your countries too ”